Update Required To play the media you will need to either update your browser to a recent version or update your Flash plugin.
By VOA
13 September, 2012

A recent study shows that investors are concerned about conditions in Kenya. The nation is preparing for general elections in March twenty thirteen. But, the Kenyan business community is showing less confidence in the health of the country's economy.

The Kenya Private Sector Alliance and the Synovate research group reported the findings. Synovate researchers talked to one hundred forty-five business leaders between July and August. A measure of the leaders' confidence, or trust, was down fifty-three percent. That compares to between sixty and seventy percent a year ago. 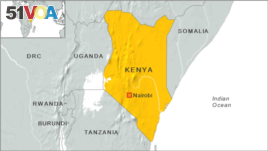 PATRICK OBATH: "We normally do a survey every six months on the business community to look at the various indicators that show the way the economy is going and the kind of fears they have, so this is a regular thing that we do. But this particular one showed indications that there is obviously some pessimism about the economy as a result of the activities that normally lead up to the election."

He also says he knows of some investors are withdrawing their investments. He says two behaviors could lead to economic problems before the elections.

PATRICK OBATH: "Two things happen, one is that if there iss any investment to be done it is delayed until after the election, once things are clearer. The second thing that we have experienced is that also the spending of people changes because people are also a bit more conscious and they tend to keep money aside just in case things don't go the way that they expect. So that downturn is what we normally see every year before election."
Kenya experienced ethnic violence after disputed presidential elections in December two thousand seven. At least one thousand three hundred Kenyans were killed. More than three hundred thousand others fled their homes to escape the unrest.

Since then, Kenyans have experienced four years of relative security. A new constitution is in place. It is meant to prevent the kinds of anger and political struggles that caused the violence five years ago.

But Kenya is not completely calm. Many people have died because of ethnic violence between competing communities in the Tana Delta area. Patrick Obath says the violence has not helped investors' confidence. He says it also harms his country's image around the world.

And that's the VOA Special English Economics Report. For transcripts, MP3s and now PDFs of our programs for e-readers, go to 51voa.com. You can also find captioned videos at the VOA Learning English channel on YouTube. I'm June Simms.