Update Required To play the media you will need to either update your browser to a recent version or update your Flash plugin.
By Bryan Lynn
05 December, 2018


A United States airport has become the first in the nation to permit passengers to use facial recognition technology to get on flights.

The system launched last week at Hartsfield-Jackson Atlanta International Airport in the state of Georgia.

The technology can be used by international passengers traveling through a special terminal. Atlanta's Hartsfield–Jackson Airport usually ranks as the world's busiest airport based on the number of passengers.

Delta said in a statement it is the first fully biometric airport terminal to operate in the U.S. The goal of the system is to simplify and speed up the process of presenting documents to get on a flight. The company says passengers can begin using the facial recognition system when they first arrive at the airport.

After the first check-in, passengers can also use face recognition to pass through security and to get on the plane. Delta says the system prevents the need for travelers to present their passport up to four times during the usual check-in process. 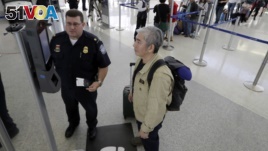 Travelers look into a camera that scans their face. This image is then compared against a collection of pictures kept by the U.S. Customs and Border Protection. The agency collects face scans from passports and visas.

The system, however, has raised concerns about privacy. Earlier this year, two U.S. lawmakers sent a letter to the Department of Homeland Security, which is home to the border protection agency.

Senators Ed Markey of Massachusetts and Mike Lee of Utah urged that official rules be put in place before the program is expanded. Official rules, the senators said, would help Americans understand and accept the program.

Jeramie Scott is a lawyer with the Electronic Privacy Information Center. He has called the use of facial recognition at U.S. airports a "massive threat."

Scott placed a statement on Twitter. He said his fear is that the government's facial recognition database of citizens could be used for other purposes without an individual's permission.

"The government now has the power to identify you whenever it wants, without your consent, and even without your knowledge," he said.

Scott added that through facial recognition, the government has created "a digital ID of millions of Americans." He added: "And they did this without a public discussion or consent – taking photos collected for one purpose and using it for another." 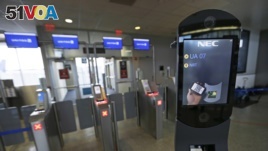 John Wagner is deputy executive assistant commissioner of U.S. Customs and Border Protection, or CBP. He told CBS News any U.S. citizen who has privacy concerns can choose not to take part in the facial recognition system. He said this would prevent the airline from collecting a face scan to compare with CBP records.

The CBP says its policy is to remove photos of U.S. citizens from its system once their identities have been confirmed.

Delta says about two percent of passengers using the Atlanta airport terminal have chosen not to use the facial recognition system. Next year, the airline plans to expand its biometric system for international travelers at Detroit Metropolitan Airport in Michigan.

Bryan Lynn wrote this story for VOA Learning English, based on reports from Reuters and online sources. Mario Ritter Jr. was the editor.

How do you feel about facial recognition technology being used in airports? Write to us in the Comments section, and visit 51VOA.COM.

terminal – n. building where people to get onto an aircraft, bus, or ship

check-in –n. the act or process of reporting one's arrival at a hotel or airport

database – n. information stored in a computer in an organized structure so that it can be searched in different ways