US Space Agency Returns to Mars with InSight Lander

Update Required To play the media you will need to either update your browser to a recent version or update your Flash plugin.
By Mario Ritter
24 November, 2018

Unlike NASA's Curiosity rover, which arrived in 2012, InSight will not move across the planet's surface.

Instead it will become the first spacecraft used only for exploring underground. It will study the geology of Mars, seeking signs of Martian quakes. 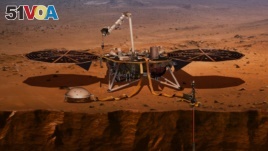 InSight is a joint U.S. and European project. The lander's full name is Seismic Investigations, Geodesy and Heat Transport. It is six meters long and 1.5 meters wide. It weighs 360 kilograms.

InSight's 1.8-meter robotic arm will put in place two experiments. Both are designed to look deep under the surface to gain understanding about the structure of the planet.

One experiment, called SEIS, for Seismic Experiment for Interior Structure, will study seismic waves. These are waves of energy caused by quakes or objects that hit the planet.

NASA scientists say SEIS will be able to sense changes in speed as the waves travel through the planet. This could help scientists learn what Mars is made of. NASA says SEIS has a shell to protect it from wind, big temperature changes and other conditions.

Another InSight experiment is to dig into the planet. A temperature sensor will be sent as far as 5 meters below the surface.

The device is designed to set itself firmly in place. It will measure temperature and look for evidence of volcanic and other geological activity.

Another important experiment will use radio waves to study Mars' "wobble." More information about this movement could help scientists determine whether the planet's core is liquid or solid. That knowledge might help explain why Mars is surrounded by a weak magnetic field.

Bruce Banerdt is the lead scientist for InSight with NASA's Jet Propulsion Laboratory.

He described the spacecraft as a robot that can take care of itself.

"It's got its own brain. It's got an arm...It can listen with its seismometer. It can feel things with the pressure sensors and the temperature sensors. It pulls its own power out of the sun," he noted.

NASA's science mission chief, Thomas Zurbuchen, said the results of the InSight project could "revolutionize the way we think about the inside of our planet."

But, first, InSight will have to land on Mars with its sensitive instruments undamaged.

Since Mars exploration started in the 1960s, only about 40 percent of orbiters and landers have successfully carried out their work.

Tom Hoffman is InSight's project manager. He said earlier successes do not lessen the concerns for each new operation. "Just because we've done it before doesn't mean we're not nervous and excited about doing it again," he said.

InSight will enter the Martian atmosphere traveling at 19,800 kilometers an hour. It will slow for landing on Elysium Planitia, a wide flat area near the planet's equator.

If all goes well, InSight could deploy its experiments in about 10 weeks. The InSight project is expected to continue for one Martian year, about two years on Earth.

AP reported this story for VOA News. Mario Ritter adapted it for VOA Learning English with additional material from NASA. Caty Weaver was the editor.

wobble –n. to move with an unsteady side-to-side motion

core –n. the central part of something