Was Life Harder for Neanderthals or Early Humans?

Update Required To play the media you will need to either update your browser to a recent version or update your Flash plugin.
By Dorothy Gundy
20 November, 2018


Neanderthals are extinct, but they were the closest relative of modern humans.

Up until about 30,000 years ago, human beings shared the Earth with Neanderthals. The two species were so close that they sometimes mated.

Scientists have long believed that life for Neanderthals was more dangerous and stressful than it was for humans during this period. Some studies have suggested that Neanderthals suffered high injury rates. Scientists have blamed the high rates on social violence, their hunting methods, attacks by meat-eating animals and the dangers of travel in snow and ice.

Katerina Harvati is with the University of Tuebingen in Germany. She studies the evolution of Neanderthals and modern humans.

Harvati believes the Neanderthals probably did face more dangers than humans do today. But she and other researchers wanted to know if that was true when the two species shared the planet tens of thousands of years ago.

To do that, she and her research team studied evidence of head injuries in fossilized Neanderthal remains. They examined information from earlier studies of fossils from western Eurasia. The skull bones were from about 80,000 to 20,000 years old.

The team looked at information in 295 skull fossils from 114 individual Neanderthals. They also examined 541 fossils from the heads of 90 members of our own species, Homo sapiens. 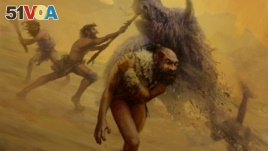 The researchers found the injury rates were about the same in the two groups. The findings were published in the journal Nature. It also published a commentary on the study by Marta Mirazon Lahr of Cambridge University in England.

She noted that the findings dispute the idea that the behavior of Neanderthals led to increased danger and risk in their lives. She also said that the study is not the final word because it only examined injuries to the head.

Scientists still have to identify the causes of all injuries and how the injured were cared for. That could give us more understanding into the behavior of both Neanderthals and ancient humans, she wrote.

Malcom Ritter reported on this story for the Associated Press. Dorothy Gundy adapted his report for VOA Learning English. George Grow was the editor.

evolution – n. a theory that the differences between modern plants and animals are because of changes that happened by a natural process over a very long time