Gene-edited Food Will Arrive Soon, But Will People Eat It?

Update Required To play the media you will need to either update your browser to a recent version or update your Flash plugin.
By Mario Ritter
18 November, 2018


Foods based on the latest biotechnologies will soon be available in grocery stores around the country.

The first foods from plants or animals that have had their genetic material, or DNA, "edited" are expected to appear on the market as early as next year.

Genetically edited food uses a different technology from "genetically modified," or GMO, foods, which are already available in many countries including the U.S.

The U.S. National Academy of Sciences says that gene editing is needed to improve food production in order to feed the world's growing population.

However, governments do not yet know how to oversee this new tool. It also is unclear whether people will be willing to buy gene-edited foods.

Dan Voytas is with Calyxt Inc., which edited soybean DNA to give it new qualities. "If the consumer sees the benefit, I think they'll embrace the products and worry less about the technology," he said.

Researchers are using the technology to make several new kinds of crops. They include high-fiber wheat, mushrooms that keep their color and highly-productive tomatoes. They also are trying to develop corn that resists dry weather conditions and rice that resists pollution. 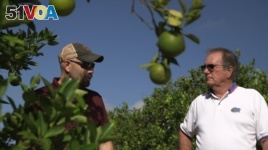 Fred Gmitter, a geneticist at the University of Florida Citrus Research and Education Center, right, visits a citrus grower in an orange grove affected by citrus greening disease in Fort Meade, Fla., on Sept. 27, 2018

Some scientists say they hope to use gene-editing to end crop diseases like citrus greening which affects fruits like oranges. However, they first must find the genes that could help a plant resist the disease.

Fred Gmitter is a geneticist at the University of Florida Citrus Research and Education Center. He said if scientists can make small changes to a plant's DNA, then "we'd have a way to defeat this disease."

The difference between gene-edited and GMO

For hundreds of years, farmers have genetically changed crops and animals by breeding them for desired qualities. This selective breeding results in giving up some other qualities. For example, modern tomatoes are much bigger than their wild ancestors, but they are more easily damaged and have different nutrients.

GMOs, or genetically modified organisms, are plants and animals that have had DNA from other kinds of organisms mixed with their own to give the new organism a specific quality. Examples of this are corn or soybeans that have had bacterial genes added to make them resistant to insects or plant-killing chemicals.

Scientists around the world say GMOs are safe to eat. But that does not keep some people from not liking them. Some people also worry that GMOs will bring unexpected results as they interact with other living things in the natural world.

Now there are gene-editing tools, with names like CRISPR and TALENs. Scientists hope these methods will permit very exact changes to plant or animal DNA without necessarily adding DNA from another organism. These methods act like scissors that can cut off molecules in an organism's DNA.

Scientists say this process could be less costly.

So far, researchers have placed most of their efforts not on adding to DNA but on cutting unwanted parts from genes causing them to "turn off."

The new soybeans developed by Calyxt have two genes that have been turned off in this way. The genes cause the plant to produce trans fats, forms of fat that have been linked to heart disease.

The company Recombinetics Inc. says it has turned off part of a gene that makes Holstein cows grow horns, making them safer to other cows and farmers.

The U.S. Agriculture Department says extra rules are not needed for "plants that could otherwise have been developed through traditional breeding."

The Food and Drug Administration, however, in 2017 proposed new rules for gene-edited animals. It has promised to give its opinion on the subject sometime next year.

At the World Trade Organization this month, the U.S. joined 12 nations including Australia, Canada, Argentina and Brazil. They called for other countries to accept international rules for gene-edited agricultural products.

Companies involved in gene-editing also want to avoid reactions similar to those that met GMO foods when they were introduced years ago. Many people reject them. And the European Union has laws limiting their sale and use.

Jennifer Kuzma is with the Genetic Engineering and Society Center at North Carolina State University. She said it is important to make sure gene-edited products are safe.

But she expects about 20 gene-edited crops will arrive on the U.S. market over the next five years. She also said that scientists are studying crops important to the poorest countries like cassava.

"We think it's going to really revolutionize the industry," she said.

Lauran Neergaard reported this story for AP. Mario Ritter adapted it for VOA Learning English. Hai Do was the editor.

DNA (deoxyribonucleic acid) –n. a substance that carries genetic information in the cells of plants and animals

edit –v. to make changes to something, such as a piece of writing, by by adding or removing parts of it

consumer –n. a person who buys goods and services

embrace –v. to accept something readily or gladly

breeding –n. the activity of keeping and caring for animals or plants in order to produce more of a particular kind

selective –adj. involving choosing from among a group of people or things to get the best result