Father of the Web Warns: Tech Giants Too Powerful

Update Required To play the media you will need to either update your browser to a recent version or update your Flash plugin.
By Bryan Lynn
04 November, 2018


The inventor of the World Wide Web has warned that the world's biggest technology companies have become too powerful and may have to be broken up.

Tim Berners-Lee made the comments to reporters with the Reuters news agency. The British-born computer scientist said he is not pleased with the current state of the internet.

Berners-Lee said one big problem is that, since the 1990s, the internet revolution has created a very few large U.S.-based technology companies. Today, those companies have grown to have a huge financial and cultural influence across the world.

"What naturally happens is you end up with one company dominating the field, so through history there is no alternative to really coming in and breaking things up," he told Reuters.

He added: "There is a danger of concentration."

Berners-Lee, who is 63, is credited with inventing the internet in 1989. The idea came about when he was working at CERN, the European Organization for Nuclear Research in Switzerland. Scientists from all over the world came to CERN. But others could not see their research because of differences in computers. 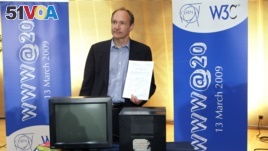 Tim Berners-Lee, inventor of the World Wide Web, stands next to the first Web server that ran on this NeXT computer, during the 20th anniversary celebration of the Web at the European Organisation for Nuclear Research (CERN) in Switzerland

Berners-Lee thought it would be easier if all the computers could talk to one another and exchange information directly. So he proposed linking the machines. His proposal would later become known as the World Wide Web.

It took two years before researchers were able to successfully link a computer server and web browser through the Internet. The World Wide Web was officially launched in August 1991.

Berners-Lee is now a professor at the Massachusetts Institute of Technology and the University of Oxford. Even with his concerns about the technology industry, he does not think it would be a good thing for governments to act too quickly to try to split the companies up.

Berners-Lee said, "Before breaking them up, we should see whether they are not just disrupted by a small player beating them out of the market, but by the market shifting, by the interest going somewhere else."

He also expressed concern about the way Facebook dealt with a misuse of data involving the British political research company Cambridge Analytica. The incident led to the release of personal information involving about 87 million Facebook users.

Berners-Lee said the Cambridge Analytica situation demonstrated the possible dangers of putting so much information in the hands of so few companies. Such incidents, he said, are causing people to lose "the feeling of individual empowerment."

Facebook chief Mark Zuckerberg apologized after the Cambridge Analytica incident and promised to do more to protect user data.

Berners-Lee said he sees social media services as increasingly being used as tools to spread hate.

"If you put a drop of love into Twitter it seems to decay. But if you put in a drop of hatred, you feel it actually propagates much more strongly. And you wonder: ‘Well, is that because of the way that Twitter as a medium has been built?'"

When Berners-Lee was asked who had been his biggest intellectual influence in life, he said it had to be his parents.

"They were building computers, so I grew up living in a world where everything was mathematics and the excitement of being able to program something was very fresh," he said.

Reuters news agency reported on this story. Bryan Lynn adapted it for Learning English. Ashley Thompson was the editor.

dominate – v. to have main control over a person or thing

alternative – n. something that is different from what is usual

concentration – n. large amount of something in the same place

disrupt – v. prevent something from continuing as usual or planned