Update Required To play the media you will need to either update your browser to a recent version or update your Flash plugin.
By Phil Dierking
26 September, 2018


For her 35th birthday, Behnoush Babzani decided to hold a party.

She used her birthday to ask friends to donate money to a cause she cares about: helping people who need bone marrow transplants.

Babzani herself received bone marrow from her brother in a transplant operation. 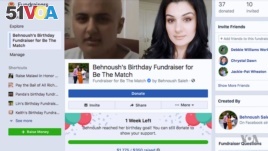 Turning to social media, Babzani published a picture of herself on Facebook's website. The photograph showed her as a hospital patient. Using a new program on Facebook, she asked her friends to help raise $350.

It has always been easy for Facebook users to send birthday messages to friends online. Now people are using the social networking site to turn birthday messages into donations for a favorite cause, such as a charitable group.

A year ago, the American company launched a new feature that has helped charities in the United States and around the world. In its first year, Facebook's birthday fundraiser feature raised more than $300 million for groups helping those in need. This success has caused some charities to rethink their methods for raising money.

However, the success of the Facebook birthday feature comes at a troubling time for the company. Social media users have begun to question how internet services connecting friends and family have also become tools for some to spread hate or influence foreign elections.

Sandberg spoke about steps Facebook has taken to identify and remove messages that violate the company's terms of service.

"We were too slow to spot this, and too slow to act. That is on us," she told the lawmakers.

"It gives people who are celebrating a birthday, a chance to turn that day into something that's bigger than themselves," she said.

Some of the charities receiving the largest donations are Saint Jude Children's Research Hospital, the Alzheimer's Association and the American Cancer Society.

In the case of Behnoush Babzani, she raised more than $1,700 in donations to help pay for bone marrow transplants.

Two weeks before his 65th birthday, Stan Jensen received a message from Facebook asking if he wanted to use his birthday to ask people to donate to a cause.

Jensen, a retired sales worker, decided that he did. He turned to 1,400 Facebook friends to help raise money for the Marine Mammal Center in Northern California, where he cares for injured sea lions. He works as a volunteer there once a week.

He said that much money was more than he could have dreamed for, and he let his friends know they made a difference.

"You've bought a ton of fish," he told them. "You are feeding all the animals we have on site for several days."

His birthday is coming up again, and the sea lions are always hungry. He's perfecting his pitch: "I know I'm special to you, but I'd like just the cost of a Starbucks coffee. Just $5. Please."

Michelle Quinn wrote this story for VOANews. Phil Dierking adapted her story for Learning English. George Grow was the editor.

bone marrow - n. a soft substance that fills the bones of people and animals

sea lion - n. a large seal that lives near coasts in the Pacific Ocean

site - n. the place where something (such as a building) is, was, or will be located

spot - v. to see or notice (someone or something that is difficult to see or find)

transplant - n. to remove (a plant) from the ground or from a pot and move it to another place