Update Required To play the media you will need to either update your browser to a recent version or update your Flash plugin.
By Alice Bryant
10 August, 2018


Even the dirt on the ground is likely making climate change worse, a new study finds. Researchers have shown that warmer temperatures are heating the soil, which is causing microbes to become more active and release more of the soil's carbon into the atmosphere.

Ben Bond-Lamberty of the Joint Global Change Research Institute is the lead author of the study. He says, "These soil changes can potentially contribute to even higher temperatures."

The findings were published on August 2 in the journal Nature.

What the study showed

Scientists studied device readings, soil measurements, plant growth details and satellite observations from around the world. Their work is the most complete study yet on the subject. 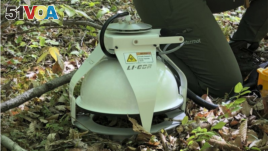 Observations from around the world show that, as temperatures have warmed, bacteria and fungi in soil are releasing more carbon into the atmosphere. (Benjamin Bond-Lamberty via AP)

This uncontrolled cycle speeds up and intensifies climate change, says Jerry Melillo of Marine Biological Laboratory in Massachusetts. Melilo was not part of the study.

How do fossil fuels fit in?

Overall, soil releases about nine times more carbon than human-caused activities. But that is part of a natural cycle: The amount of carbon released into the air is about equal to the carbon oceans and plants take in.

However, carbon released from fossil fuel causes an imbalance. Burning coal, oil and natural gas puts more carbon into the atmosphere than nature can take out. The additional carbon heats the air and soil. And as the air and soil get hotter, the earth will release yet more carbon that it has been holding.

If something isn't done, "we are really in trouble," said Rattan Lal of Ohio State University, who wasn't part of the study.

He added that proper soil conservation can help keep more carbon in soil. Conservation methods include avoiding turning the soil, covering off-season crops and leaving crop deposits on the ground.

Seth Borenstein reported this story for the Associated Press. Alice Bryant adapted it for Learning English, with additional information from the Pacific Northwest National Laboratory.

climate change – n. a change in the world's climate patterns attributed largely to the increased levels of atmospheric carbon dioxide produced by the use of fossil fuels

microbe – n. an extremely small living thing that can only be seen with a microscope

fungus – n. any one of a group of living things that often look like plants but live on dead or decaying things (plural: fungi)

carbon dioxide – n. a gas that is produced when people and animals breathe out or when fossil fuels are burned and that is used by plants for energy

cycle – n. a set of events or actions that happen again and again in the same order

fingerprint – n. a distinctive or identifying mark or characteristic