Update Required To play the media you will need to either update your browser to a recent version or update your Flash plugin.
By VOA
14 November, 2018


For nearly 130 years, the world's scientists have used a singular small, metal cylinder to define the exact weight of a kilogram. But that is about to change.

The cylinder was made in 1889 of platinum and iridium metals. It is called the Grand K. The International Bureau of Weights and Measures, or BIPM, keeps the object at its headquarters near Paris. Many safeguards protect the Grand K. In fact, it takes three specially chosen people to open the container that holds the cylinder. They must each release separate locks at exactly the same time to do so.

The Grand K has served as the official world measurement tool for weight in kilograms. All modern mass measurements have been based on the Grand K.

There are seven main units of official measure. These include the meter for length, and the second for time. Other units measure things like electrical current or amounts of a substance. 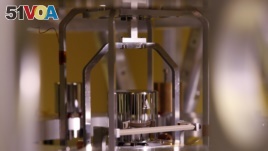 In this photo taken Wednesday, Oct. 17, 2018, a weight is set up at the International Bureau of Weights and Measures, in Sevres, near Paris. (AP Photo/Christophe Ena)

Currently, the kilogram is the only measure based on a physical object. The meter used to be represented by a singular metal stick. In 1983, scientists decided that a meter would be defined by the speed of light. Light speed is constant. Light always takes the same amount of time to travel one meter.

The Grand K was only rarely – and always extremely carefully – removed so that other kilos sent from around the world could be compared to it.

But even such rare contact does not fully protect the Grand K and its mass. It is still affected by its environment. This can be a problem when using it as the single exact weight measurement tool.

Ian Robinson is an engineering specialist at Britain's National Physical Laboratory. He told Reuters that pollutants in the atmosphere can easily add weight to the historic measuring tool.

"When you just get it out of the vault, it's slightly dirty," Robinson said. "But the whole process of cleaning or handling or using the mass can change its mass."

Now, officials at the BIPM believe the time is right to change the kilogram standard, to make it fit better in today's technology-driven world. So on November 16, scientists from around the world will gather in Paris to approve replacing the Grand K with a new standard.

BIPM's director, Martin Milton, told the Associated Press he does not see the event as a sad development, but as "a moment of celebration." He says this is because it will be the last world measurement standard to "finally be replaced by new innovation."

The Grand K is to be replaced by a new definition based on a complex physics formula called "Planck's constant." This process can measure the mass of an object using electromagnetic force. The method will permit scientists to correctly measure an exact kilogram without comparing it directly with the weight of a physical object.

Milton says changes in drug and chemical production now require new ways to measure much smaller amounts of material. He says a kilo is fine for weighing things like potatoes, where extreme exactness is not necessary.

"But it's not the right weight for many applications in demanding science and industry," he said.

Scientists have spent years developing the new definition to make sure the change goes smoothly.

Although the time has finally come to change the Grand K, Milton says the system has served humanity well and proved man's ability to unite for science. "It's been called a great work of peace, actually, because it's one of the areas where all of the states of the world come together with absolutely the same objective."

Bryan Lynn wrote this story for VOA Learning English, based on reports from the Associated Press, Reuters and Agence France-Presse. was the editor.

lock – n. device used to close a door that requires a key to open

unit – n. measure used to express an amount or quantity

vault – n. a special room where valuable objects are kept

innovation – n. new idea or method that is being tried for the first time, or the use of such ideas or methods

formula – n. a set of letters, numbers, or symbols used to express a mathematical or scientific rule

application – n. the way in which something can be used for a particular purpose

scalable – adj. able to grow or be made larger