Update Required To play the media you will need to either update your browser to a recent version or update your Flash plugin.
By Bryan Lynn
18 November, 2018


A new study has found that driver assistance systems fail to perform some actions in real-world test situations.

The American Automobile Association of America, AAA, also called "Triple-A," carried out the study. The nonprofit organization provides automobile and travel-related services to more than 59 million members across North America.

The organization tested four vehicles equipped with driver assistance technology. Such technology is designed to electronically help drivers with things like staying in their lane. The systems can also stop the car automatically in case of an emergency.

The test vehicles that AAA used included a 2018 Mercedes-Benz S-Class, a 2018 Nissan Rogue, a 2017 Tesla Model S and a 2019 Volvo XC40. The experiments aimed to recreate common driving situations to measure the performance of the assistance systems. 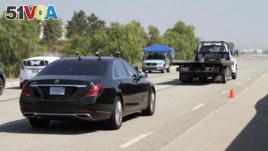 The American Automobile Association of America (AAA) conducted its tests of assisted driver systems both on public roads and in a controlled environment. (Photo: AAA)

All of the test models had systems designed to provide emergency stopping assistance. In addition, they were built to help keep vehicles within a lane and to back up speed control systems.

AAA said the test vehicles repeatedly struggled on public roads when dealing with some real-world situations. The researchers reported repeated cases in which the test vehicle did not stay fully in its lane or moved back and forth within the lane.

Other problems included the vehicles braking incorrectly, following cars in front of them too closely and making unexpected speed changes. The study found that 90 percent of cases that required a driver to take over to avoid a crash happened because of a vehicle's inability to keep inside a lane.

AAA said, "The irregular and complex nature of the real-world driving environment revealed the vulnerabilities of this technology." It also said the tests found that the systems generally performed best on open freeways or on roads with very slow traffic.

Separate tests were carried out in a controlled environment off public roads. In those tests, AAA reported that all vehicles were able to successfully stay in a lane. All were also able to recognize the presence of another vehicle entering into traffic.

However, three out of four vehicles failed a test in which a lead vehicle changed lanes, causing a stopped vehicle to suddenly appear. AAA said in this test, each of the three cases required a driver to intervene to avoid an immediate crash. The American Automobile Association of America (AAA) conducted its tests of assisted driver systems both on public roads and in a controlled environment. (Photo: AAA)

AAA noted that automakers usually warn that the ability to recognize a stopped vehicle after a lead vehicle changes lanes is a design limitation for driver assistance systems. But AAA's director of automotive engineering, Greg Brannon, said researchers had expected the vehicles to notice the stopped cars and react in time.

The AAA findings are the second tests to show that driver assist systems cannot deal with every situation in real-world driving, including some that are quite common. The Insurance Institute for Highway Safety released similar test results in August.

As part of its study, AAA asked a sample of Americans about their knowledge of different driver assistance systems. It said about 40 percent of those questioned said they believed such systems meant the vehicles could drive by themselves.

Brannon said one reason for the misunderstanding could be that several manufacturers use the word pilot in the names of their systems. Tesla calls its system "Autopilot," while Volvo uses the name "Pilot Assist." Nissan's system is called "ProPilot Assist."

Brannon said with today's ever-changing technology, "there is a greater need for naming that clearly signals to a driver what the system does."

He added, "Vague or confusing terminology may lead someone to overestimate a system's capability, unintentionally placing the driver and others on the road at risk."

Bryan Lynn wrote this story for VOA Learning English, based on reports from the Associated Press and AAA. Ashley Thompson was the editor.

lane – n. part of road that is marked by painted lines and used as a single line of vehicles

braking – n. system that stops or slows the movement of a vehicle

vulnerability – n. state of being exposed to the possibility of being attacked or harmed

vague – adj. not clear or certain

unintentional – adv. not planned or intended