Farm Animals May Soon Get New Qualities With Gene-Editing

Update Required To play the media you will need to either update your browser to a recent version or update your Flash plugin.
By Anne Ball
25 November, 2018


This may seem impossible, but an American company is seeking to change farm animals by cutting or adding to their genes.

By using a process called gene-editing, the company, Recombinetics, says it may be able to remove problem-causing genetic traits from some animals.

Recombinetics says it can produce cows born without horns — those sharp objects on top of their heads. By using the editing process, the company says it can also breed cows that survive in hot weather. With gene-cutting, it says, pigs could live and never fully grow up. Why would that be a good idea? When male pigs reach puberty, their meat can have an unpleasant smell. 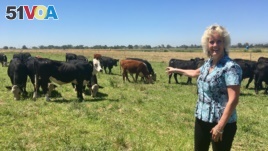 In this July 11, 2018 photo, animal geneticist Alison Van Eenennaam of the University of California, Davis, points to a group of dairy calves that won't have to be de-horned thanks to gene editing. (AP Photo/Haven Daley)

The company must first persuade United States government officials that gene-edited animals are safe, and no different than ones bred the traditional way.

To date, no gene-edited animals are sold in the country. The U.S. Food and Drug Administration has approved a kind of salmon genetically engineered to grow fast, but those fish are not yet available.

There has been debate as to whether people would want to eat food that comes from gene-edited animals.

Last month, the FDA announced an action plan that described the steps it will take to support both plant and animal biotechnology, while safeguarding public health.

To make this technology more acceptable, Recombinetics is not yet changing animals' genes to greatly increase their growth or productivity. That could make the animals seem too strange to people. Instead, the company says it is adding gene-edited traits to ease animals' suffering.

"It's a better story to tell," Tammy Lee told the Associated Press. She is chief executive officer of the company, based in St. Paul, Minnesota.

Cow horns can hurt other cows, animals and people. Animal rights activists criticize the way farmers currently remove cow horns. They use hot irons or a caustic, burning substance to remove the bone.

This is how Recombinetics says gene-editing works: In a laboratory, workers use an instrument called a "molecular pencil" to "erase, or cut, re-write, remove, or add genes." This newly edited gene then would be included when an animal is impregnated.

Recombinetics solves the cow horn problem by cutting out the gene for growing horns, ending the need for painful removals. Once the gene is taken out, all future generations after that first animal will also lack the gene -- and would not develop horns.

Last year, the company had a gene-edited male cow without horns. It fathered several cows. They were also all born hornless and are being raised on the grounds of the University of California, Davis. When the female offspring grow up and begin producing milk, the milk will be tested for any problems.

Recombinetics is also developing cows that are less likely to suffer in high temperatures, so they can live in hotter climates.

When it comes to raising pigs for their meat, Recombinetics is working with ones that will not go through puberty. When male pigs go through puberty, their meat can develop an unpleasant smell. Currently, farmers castrate the males, removing their sex organs. Animal rights activists say the treatment is painful because it is usually done without medicine to kill the pain. Editing genes to stop pigs from experiencing puberty would make castration unnecessary.

The company says that it is doing the work of traditional animal breeders, only much faster and with the exact science of cutting and editing genes.

Recombinetics' Tammy Lee said she thinks if the public accepts gene-editing, farmers would be interested in traits that increase productivity in the animals. For example, she said, pigs would edited to have larger number of babies for each pregnancy.

Change the animal or change the system?

Critics question whether using this technology is "playing God," doing something that is not natural.

Paul Thompson is a professor of agriculture at Michigan State University. He told the Associated Press that gene-editing may serve as evidence of how modern food production already treats animals.

Thompson said there has been a debate for at least 20 years, "of whether you need to change the animal or change the system."

Support for changing the genes may also depend on how the technology is used. For example, will it be used to help the animals, prevent disease, or increase productivity?

The Humane Society of the United States works for better treatment of animals. The society supports gene-editing to end castration of pigs and removing cows' horns. But the group has yet to give the technology its complete approval.

puberty - n. the period of life when a person's sexual organs mature and he or she becomes able to have children

impregnate - v. to make (a woman or a female animal) pregnant

pencil - n. an instrument used for writing and drawing that has a hard outer part and a black or colored center part

iron - n. a heavy type of metal that is very common, occurs naturally in blood, and is used to make steel and in many products