Update Required To play the media you will need to either update your browser to a recent version or update your Flash plugin.
By Susan Shand
25 January 2021

Austin takes office as Americans are starting to understand that some of the people who took part in the January 6th attack on the U.S. Capitol were current or former members of the military.

The retired four-star general recently told senators that the Pentagon's job is to "keep America safe from our enemies. But we can't do that if some of those enemies lie within our own ranks."

Removing racists from the military is not his only immediate goal. Austin's military will also play an important part in making sure all Americans get the coronavirus vaccine.

But the racism issue is personal for Austin. Before the 93-2 vote that confirmed him in the Senate on Tuesday, he explained why.

In 1995, while Austin was serving at Fort Bragg, North Carolina, three white soldiers were arrested in the murder of a Black man and woman who were walking down the street. Investigators said the two were killed because of their race.

The killing forced an investigation, and 22 soldiers were linked to "skinhead" groups or others holding extremist beliefs. "Skinhead" is a term used to describe neo-Nazis or others with extreme racist opinions. Of the 22 soldiers, 17 were considered white supremacists or separatists.

"We woke up one day and discovered we had extremist elements in our ranks," Austin told the Senate Armed Services Committee.

"We discovered that the signs for the activity were there all along. We just didn't know what to look for or what to pay attention to," he added. 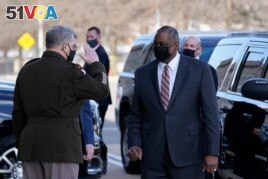 Defense Secretary Lloyd Austin, right, is saluted by Chairman of the Joint Chiefs of Staff Mark Milley as he arrives at the Pentagon, Jan. 22, 2021, in Washington.


Austin is not the first secretary to see this problem. Racism has long been an issue in the military. Leaders say only a small number of soldiers hold extremist views. However, there have been several acts of racial hatred.

A recent Air Force report found that Black service members in the Air Force were far more likely to be investigated, arrested, face disciplinary actions and be asked to leave the military.

Based on 2018 information, about 66 percent of the military's members are white and about 17 percent are Black in the lower ranks. In the higher ranks, the percentage of Black members decreases. The American population is about 75 percent white and 13 percent Black.

Over the past year, military leaders have tried to make changes. But change came slowly during the administration of President Donald Trump. For example, it took many months for the Pentagon to ban the Confederate flag last year. The flag has long been a symbol of racism, because it was the flag of the slave-holding South during the American Civil War.

Senators asked Austin many questions about extremism in the military and about his plans to remove it. The hearing was held two weeks after lawmakers fled the deadly attack at the Capitol. Many of the attackers held racist or extremist views.

Senator Tim Kaine asked Austin about the steps he will take, adding that "if we're divided against one another, how can we defend the nation?"

Austin -- who broke racial barriers throughout his 40-year Army career -- said military leaders must send a clear message that extremist behavior is unacceptable.

Austin was the first Black man to serve as head of U.S. Central Command and the first to be the Army's vice chief of staff. He said solutions must come from within the military services and lower-ranking leaders. They must make sure that their soldiers are trained and know what behaviors are not permitted.

Austin said it will not be an easy problem to fix. He also said training is necessary and must continue throughout a soldier's time in the military.

Austin was approved after legislators gave him a waiver to overcome a law that bans anyone from serving as defense chief until they have been retired for more than seven years. Austin has been retired for five years.

After President Joe Biden signed the waiver, Austin walked into the Pentagon to begin his job. His first international phone call was to NATO Secretary General Jens Stoltenberg.

The 67-year-old Austin is a 1975 graduate of the U.S. Military Academy at West Point.

bureaucracy – n. a large group of people who are involved in running a government, but who are not elected

rank – n. one's position in an organization, such as the military

white supremacist – n. one who believes white people are superior to others of different races

symbol – n. a sign or object used to represent something

waiver – n. a paper that allows a person not to use or require something