Update Required To play the media you will need to either update your browser to a recent version or update your Flash plugin.
By Bryan Lynn
11 April, 2019


The whales we know today are large, fish-like animals that only live in the sea. But the ancestors of these underwater creatures had legs to carry them on land.

Now, scientists working in South America have reported the discovery of fossils of a four-legged whale. The scientists believe it lived about 43 million years ago. They say the find is important to helping understand the evolution and movements of these early whales.

Paleontologists reported on the discovery in the publication Current Biology. They wrote that a research team discovered the fossils eight years ago in a coastal desert area of southern Peru. Scientists have been studying them and putting together the skeleton. 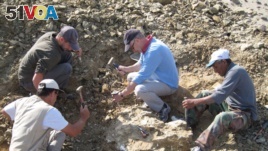 The four-legged whale is called Peregocetus pacificus, which in Latin means "the travelling whale that reached the Pacific Ocean." It was an ancestor of whales that were amphibious, having the ability to live both on land and in water.

Fossil evidence shows that the first such animals appeared about 50 million years ago in areas currently making up India and Pakistan. The creatures were about four meters long. They were able to carry their own weight and could walk the Earth.

Scientists believe the Peregocetus spent most of its time in the water, but might have climbed onto the rocky coast to rest or give birth. The fossil shows evidence that the animal's hands and feet had small hooves and their toes were connected to aid in swimming.

Olivier Lambert is a paleontologist at the Royal Belgian Institute of Natural Sciences in Brussels. He unearthed the fossil and has examined it with other scientists from Peru, Italy and France.

Lambert says the fossil provides valuable information about how these early whales developed and traveled. Finding it in Peru suggests the whales spread from South Asia to North Africa, then crossed the South Atlantic to reach the Americas.

At that time, the distance across the ocean was thought to have been half what it is today. In addition, east-west ocean currents at the time are believed to have helped the whales' movements. Later, the ancestors of Peregocetus moved further north to reach the east coast of North America.

In the past, fossil remains of four-legged whales were found in India, Pakistan and parts of Africa. But the African samples were in too many pieces to provide a clear picture of the animals. Lambert called his group's discovery "the most complete specimen ever found for a four-legged whale outside of India and Pakistan."

The scientists say the newly-discovered fossils provide evidence that the whale also had good swimming skills. Lambert said bone parts examined from the tail suggest the whale moved in similar ways to current amphibious animals, such as otters and beavers.

Lambert says Peru's Pisco Basin, where the discovery was made, likely holds other fossils that can provide new information about whales and other creatures from the past.

Bryan Lynn wrote this story for VOA Learning English, based on reports from Reuters, Agence France-Presse and online sources. George Grow was the editor.

evolution – n. the way in which living things gradually change and develop over millions of years

paleontologist – n. someone who studies fossils

hooves – n. the hard parts on the bottom of the feet of some animals

specimen – n. an animal, plant, etc. that is used as an example of its type, especially for scientific study

tail – n. the long, narrow part that extends from the back of an animal's body