Update Required To play the media you will need to either update your browser to a recent version or update your Flash plugin.
By VOA
02 October, 2012

A new genetic study has found four different types of breast cancer. Experts say this explains why drugs used to treat one form of breast cancer may not work to cure another form.

The findings are the latest results of a large cancer-gene mapping project called the Cancer Genome Atlas. Money for the research comes from the United States government's National Cancer Institute. The project began in two thousand six. Organizers set a goal of identifying the bio-molecular causes of more than two hundred human cancers. 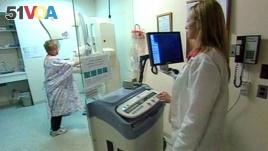 Woman taking mammogram test
The latest findings offer the possibility of more-effective treatments for breast cancer with drugs that already exist. The findings are also giving doctors hope that they could one day find a cure for breast cancer.

The World Health Organization says breast cancer kills about four hundred fifty thousand people every year. It is the number one cause of cancer deaths in women.

The new study showed similarities between some breast cancer tumors and cancer cells that invade other parts of the body.

JEFF BOYD: "What we are learning is that, you know, we've got to get beyond this ‘treat every breast cancer the same' -- do a lumpectomy, treat with these three drugs, you know, radiate locally and cross your fingers. We now know that, as we're beginning to learn for many cancer types, that there are multiple molecular genetic cancers which render them essentially separate diseases."

For example, a drug called Herceptin has been approved for use to treat all breast cancers. But the drug does not work on all breast tumors. Now, researchers have a better understanding why.

Mathew Ellis is a cancer researcher at Washington University in St. Louis, Missouri. He has worked with the Cancer Genome Atlas. He hopes targeted treatments for different types of breast cancer will soon become available to help his patients.
MATTHEW ELLIS: "Now we have to fast-forward to a day -- hopefully in the next year or two -- where at least in clinical studies the information is flowing forward to the patients and the doctors. And critically that data flow includes access to the drugs."

And that's the VOA Special English Health Report. We have placed a link to the breast cancer study on our website, 51voa.com. I'm Steve Ember.