What Parents Can Do to Help Prevent Dating Abuse

Update Required To play the media you will need to either update your browser to a recent version or update your Flash plugin.
By VOA
24 July, 2012

Today we take another look at teaching young people how to build healthy relationships. Last week we told you about a new study in the United States. Fifteen percent of seventh graders in that study said they had experienced physical violence in a relationship with the opposite sex. Seventh graders are about twelve years old.

Concerns about dating abuse at such a young age are leading to new programs to teach eleven- to fourteen-year-olds about healthy relationships. The northwestern state of Idaho has had a program for the last few years called Start Strong Idaho. Director Kelly Miller says healthy relationships depend on open, honest communication -- and that starts with communication between children and parents. 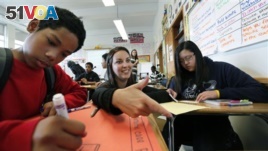 A middle school in Seattle, Washington
KELLY MILLER: "We need to connect with parents so parents understand that they are critical in terms of helping young people understand healthy relationships."

Ms. Miller advises parents to talk with their children anytime they can. Parent-child communication may not always prevent an abusive relationship between teenagers or preteens. But experts say it can reduce the risk. Seventy-five percent of students in the study said they talk to their parents about the issue of dating violence.

A good time to have a conversation about a difficult issue is during a family meal or after watching a movie or television show together. Kelly Miller says young people need rules and boundaries. They also need the skills to be able to resist pressure to be on the phone all the time or to text when they should be sleeping.

The Start Strong Idaho website offers some advice. For instance, watch out for these signs that a phone could be part of an abusive relationship: Feeling like you have to answer text messages or calls right away. Feeling like the texts you receive have gone from caring to controlling. Being pressured to constantly be on your phone, even when you are with friends. And being pressured to send sexual texts or pictures.

Kelly Miller also tells young people not to write anything on Facebook that they would not want their parents or other family members to see. And she reminds them that there is no need to accept friend requests from strangers -- or to give your phone number to someone you don't know.

Start Strong Idaho holds separate workshops for parents and teens and also brings the two groups together. Kelly Miller says, during these meetings, families often learn things they never knew about each other.

KELLY MILLER: "One mom came up and said 'I'm so thankful there was this workshop tonight because I found out my son not only was dating but currently has two girlfriends at the same time and didn't understand the problem with that."

And that's the VOA Special English Health Report. You can read and listen to last week's program, and all of our programs for people learning English, at 51voa.com. I'm Karen Leggett.
Related Articles
go top