Update Required To play the media you will need to either update your browser to a recent version or update your Flash plugin.
By VOA
05 June, 2012

A study has raised questions about a widely held belief involving cholesterol. The belief is that high levels of so-called good cholesterol in the blood can reduce the risk of a heart attack.

The medical name for "good" cholesterol is high-density lipoprotein, or HDL. Doctors commonly believe it reduces the risk of heart attack by removing fatty deposits that can block the flow of blood in the arteries of the heart. 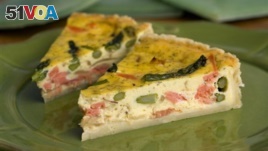 Is there such thing as good cholestrol?
But Dr. Sekar Kathiresan at Massachusetts General Hospital in Boston says the effects of high HDL have never been proven. He says the new study that he and other researchers did suggests that HDL cholesterol does not affect the risk of heart attack.

SEKAR KATHIRESAN: "This has been the major assumption over the last thirty years, that if you raise HDL cholesterol, the risk for heart disease will be lowered. And I think we have now broken that assumption, broken that link using this gene variant."

The researchers say about four percent of people have a genetic change that gives them a naturally high level of HDL. The study found that those who were genetically "programmed" to have higher HDL levels were just as likely to suffer heart attacks as those who were not.

A second analysis looked at fourteen gene variants that increase good cholesterol. Dr. Kathiresan says people with the most variants had no more protection against heart attacks than anyone else.

But he says there is no dispute about low-density lipoprotein, or LDL. LDL, the so-called bad cholesterol, causes a buildup of fatty substances inside arteries and increases the risk of heart attack.

Dr. Kathiresan and his colleagues published their findings in the Lancet medical journal.

Another widely held medical belief has also come into question recently. For years, men over the age of forty have been told to get a simple blood test to see if they have prostate cancer. Now, experts on a government committee are advising them not to. Dr. Virginia Moyer heads the United States Preventive Services Task Force

VIRGINIA MOYER: "Close to two-thirds of older men have prostate cancer and yet the huge majority of them never have a problem from it in their lifetime."

The task force examined two large studies before deciding that treating the cancer found by the PSA test can do more harm than good. Effects of the treatment can include a loss of sexual ability and bladder control, as well as other problems including heart attacks.

Some experts support the findings of the task force, but others disagree. Urologist Deepak Kapoor says in about twenty years of PSA testing, death rates for prostate cancer have dropped by thirty-eight percent.