Update Required To play the media you will need to either update your browser to a recent version or update your Flash plugin.
By VOA
2012-4-10

In the past year, Burma has opened its political system and reached cease-fire agreements with some ethnic militias. The government has also eased media restrictions. But many aid groups say their jobs have not gotten any easier.

Health workers are warning about the spread of a form of drug-resistant malaria. The malaria is resistant to treatment with artemisinin. It was first seen several years ago in Cambodia.

Frank Smithuis started a group called Medical Action Myanmar. He says even with the recent political openings, aid organizations still find it difficult to gain access to areas most in need of aid. This is true, he says, especially in areas torn by many years of conflict along Burma's eastern border. 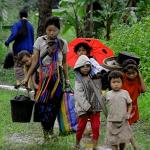 A file photo of Burmese refugees.
FRANK SMITHUIS: "There are now very good opportunities because of the cease-fire agreements with the Karen and the Mon. Larger areas should now be open for access to a joint activity to stop this artemisinin resistance spread. However that has not happened yet and we definitely need to have more openness and more activity and more international donor money. And that's very, very important."

In the past, many nongovernmental organizations simply worked without official approval. Lower-level government officials largely ignored organizations that did not follow the rules.

Until two thousand nine, just three international nongovernmental aid organizations had the required approvals to operate inside Burma. Yet more than one hundred were operating there. Many were able to get a memorandum of understanding that allowed them to work without an official registration.

But then came the recent political changes. Heads of aid organizations say lower-level officials are now unclear about their powers and responsibilities. In many cases they are enforcing the requirements more closely.

Save the Children is an aid organization whose work is mostly related to mother and child health in Burma. Kelland Stevenson with Save the Children says, in general, ministries and government workers have become much more cooperative. He agrees with those who say the barriers that humanitarian workers now face are largely bureaucratic.

KELLAND STEVENSON: "It shouldn't be a political discussion. There remains a bit of command and control from government, and it's not going to open up overnight. And the discussion about getting access to new areas is under way. You have to remember these changes have been extraordinarily dramatic in such a short time. I mean, we're talking a year."

Kelland Stevenson says "things are changing so quickly." Still, aid groups warn that some issues -- such as the drug-resistant malaria -- may only get worse unless the government also takes action quickly.