A Birth Procedure Does Little to Prevent Bleeding

Update Required To play the media you will need to either update your browser to a recent version or update your Flash plugin.
By VOA
2012-3-20

The World Health Organization has been recommending several ways to reduce the risk of hemorrhage immediately after birth. These include giving the mother a hormone called oxytocin. It helps the uterus expel the placenta, or afterbirth. Another recommendation to help expel the placenta has been to use what is called controlled-cord traction. In this procedure, the birth attendant gently pulls on the umbilical cord while pushing upwards on the mother's stomach. 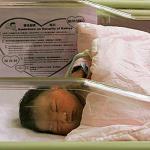 Uncontrolled bleeding, or hemorrhage, is responsible for one-third of pregnancy-related deaths in Asia and Africa.

Dr. Metin Gulmezoglu of the World Health Organization led a study on the effectiveness of controlled-cord traction. He says it is not easy to perform and, if it is not done correctly, it can harm the mother.

METIN GULMEZOGLU: "If it's not applied by people who are skilled in doing it, then it may cause more problems."

The study involved more than twenty-three thousand pregnant women who had vaginal births. The births happened in sixteen hospitals and two primary health-care centers in eight countries. These were Argentina, Egypt, India, Kenya, the Philippines, South Africa, Thailand and Uganda.

About half of the mothers received a so-called full package of measures including controlled-cord traction. The other women gave birth helped only by gravity and pushing by the mother. Both groups of women received injections of oxytocin immediately after giving birth.

The study showed that, on average, both groups had about the same amount of blood loss. The study found that controlled-cord traction had very little effect in reducing the risk of serious blood loss -- defined as a liter or more. There was serious blood loss in 1.9 percent of the women who received the procedure, compared to 2.1 percent of those in the simplified group.

Dr. Gulmezoglu says using oxytocin was much more important than pulling on the umbilical cord to reduce blood loss.

METIN GULMEZOGLU: "The main factor that helps to reduce blood loss after birth is the oxytocin, the medication that helps the uterus to contract. And the procedure itself, in our study, adds a minute amount."

Oxytocin is injected, but only into the muscle. This makes it easier to administer for birth attendants with little training. Also, the hormone does not cost very much. But it can lose its effectiveness if stored at high temperatures. The WHO may recommend single-use syringes with sensors to warn of exposure to high temperature.

The WHO is expected to changes its guidelines based on the new findings. The study is in the Lancet medical journal.