Refugee Camps are a Breeding Ground for Disease

United Nations aid agencies say hundreds of thousands of people have fled their homes because of violence in the Middle East and Africa, now are living in poor conditions in refugee camps. The agencies say serious problems with food and water are causing life-threatening diseases to spread in the camps.

Health Officials say cholera, malaria, jaundice and malnutrition are threatening the lives -- a refugees who had hoped to be safe when they fled to the camps. 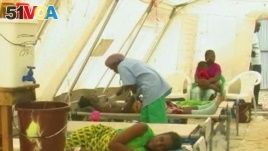 United Nations relief agencies report that serious food and water problems are turning many refugee camps in the Middle East and Africa into breeding grounds for a range of life-threatening diseases.

There are thousands of people at one camp in South Sudan. They fled the military conflict in the area. Camp officials say there has been a big increase in hepatitis E: a viral disease spread through bad food and water.

ADRIAN EDWARDS: "Hepatitis E hits young people between the ages of fifteen and forty hardest. In the three camps where we see refugees with acute jaundice syndrome, more than half are between twenty and thirty-nine."

Many camps in countries like South Sudan, Sierra Leone, Libya, and Nigeria have reported severe cholera outbreaks. Officials say keeping cholera and jaundice from spreading is very difficult. They believe the best way to deal with these diseases is to prevent them.

Dr. Peter Hotez is an infectious disease expert.  He says cholera can push people to the edge of death quickly.

PETER HOTEZ: "The vibrio cholerae bacillus produces a toxin, and this toxin has the ability to poison cells in such a way that you can no longer absorb water so you can become just a shriveled, desiccated individual just a few hours after infection."

Pillar Bauza is with the UN refugee agency. She works with children in refugee camps across Africa.

Refugee camps along the border with Syria and Turkey have reported cases of cholera and malaria. Experts warn that other bacterial, viral and parasitic diseases could become deadly epidemics in crowded camps as well. Dirty conditions are common in the camps, while safe food and drinking water are hard to find.

And that's the VOA Special English Health Report. For more health news, go to learningenglish.voanews.com. You can read and listen to stories and learn American English. I'm Milagros Ardin.
___