Update Required To play the media you will need to either update your browser to a recent version or update your Flash plugin.
By Mario Ritter
13 March, 2017


In the ancient world, the East and West may have been linked by nomads. These were people who traveled with their herd animals in search of good feeding grounds.

That is the finding of new research about the ancient trade path known as the Silk Road. The recent findings were published in the journal Nature.

The study suggests that herders were not separated from the development of the great civilizations of Asia and Europe. Instead, they were important actors in forming the trade path that crossed the world's largest land mass. 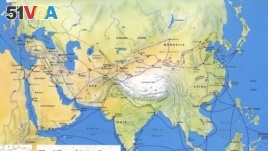 There were many trade routes between East and West.

The Silk Road was an ancient trade route that may have developed as early as 2,300 years ago. It was not really one road. Rather, it was a number of paths connecting many places between the cities of Xi'an, China, in the east and Genoa, Italy, in the west.

But traders traveling along this long land route faced a huge barrier standing in their way: the mountains of Central Asia.

These mountains include the Pamir and Tian Shan ranges. They are nearly as tall as the Himalayas, the world's highest mountain range.

Michael Frachetti is an anthropologist at Washington University in St. Louis. He was an author of the recent study.

He says those mountains were a "pretty scary barrier" to traders bringing goods through Central Asia.

Researchers have been looking for a long time for the routes ancient Silk Road traders used. They have often followed the easiest paths between cities along the way.

Herding communities have lived in the mountains of Central Asia for thousands of years. They follow paths up and down the mountains to find food for their flocks as the seasons change. 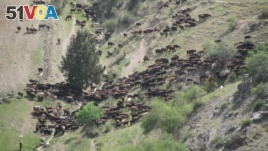 A nomad's herd of sheep flowing through high altitude pastures of Uzbekistan.

As they traveled from pasture to pasture, they would meet, trade and even marry members of other communities. Their meetings are like festivals, he said. They meet, goods are exchanged and connections are formed.

Early on, Frachetti's research did not deal with the Silk Road. He studied herding communities in Kazakhstan.

He developed an idea of how, during ancient times, communities in that area moved through the mountains from the highlands in summer to the lowlands in winter.

He made maps of herding paths in these areas.

Frachetti did not get a lot of interest in his earlier research.

"And people kind of smiled and said, ‘That's a nice way to think about herding.' And that's literally where it sat for 11 or more years."

In this Wednesday, Sept. 23, 2009. Troubled highway is seen near Pol-I-Kumari, Afghanistan, along the one time Silk Road route.

Frachetti and his colleagues compared their map of herding paths with Williams' map of Silk Road sites. He found that they matched well.

"There's kind of a moment of truth where you say, ‘Okay, how much do they intersect?' And the intersection was surprising," he said.

The research suggests that before traders crossed Asia in caravans, there was a network of interconnected communities through the mountains. This later became an important part of the Silk Road.

Dan Rogers is with the Smithsonian National Museum of Natural History. He says the new research is important in two ways.

He says it shows how traders got through mountains to help develop an important trade route. But it also changes ideas about nomads. The research creates a much more complex "picture" of Central Asia, he says.

Frachetti says the next step is to search for more evidence to connect the sites that both groups of researchers have found.

He calls the new findings "a model against isolationism." The Silk Road connected very different civilizations, Frachetti said. But it did this by bringing together nomads.

That, he said, is a pretty powerful idea.

We want to know what you think about this article. Write us in the comment section below or on Facebook.

range –n. a group of mountains

routes –n. the way to get from one place to another

anthropologist –n. a scientist who studies humans, their origins and societies

caravan –n. a group of animals and people traveling together on a long trip especially through a desert

author –n. a person who has written something, the writer of a book or other work

isolationism –n. a policy of not making agreements or working