Update Required To play the media you will need to either update your browser to a recent version or update your Flash plugin.
By Alice Bryant
12 March, 2017


Late last year, the United Nations promised to strengthen its fight against the spread of the deadly cholera disease. U.N. peacekeeping troops unknowingly brought the disease to Haiti seven years ago.

But, so far, the U.N. has raised just a small amount of the estimated $400 million it needs over the next two years to fight the disease.

U.N. Secretary-General Antonio Guterres wrote that the voluntary funding received so far makes up only 2 percent of its goal. It has received around $8 million in funding.

As of February 8, Chile, France, India, Liechtenstein and South Korea together had promised almost $2 million. Outside of that fund, Japan has promised $2.6 million and Canada has committed about $6 million.

Guterres asked all member states to notify him by March 6 of their plans to help finance the campaign.

U.N. peacekeepers arriving from Nepal are believed to have caused Haiti's current cholera epidemic. The disease spread near a U.N. base in October of 2010.

Since then, more than 788,000 cases of the infectious disease have been reported. At least 9,000 people have died.

Last December, former Secretary-General Ban Ki-moon apologized to Haiti's people, on behalf of the United Nations, "for the loss of life and suffering caused by the country's cholera epidemic." 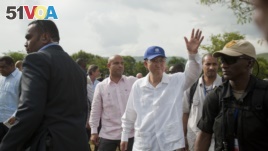 The U.N. has two goals for the funding: reducing cholera and aiding victims. Its aim is to decrease the number of yearly cases from the current 30,000 to fewer than 10,000 by the end of 2018.

It also plans to help all Haitians have clean drinking water and toilets by 2030. Right now, about 25 percent of the population owns or lives near toilets, the U.N.'s recent letter said.

Vibrio cholerae bacteria spread through food and water polluted by an infected person's feces - or waste - the U.S. Centers for Disease Control and Prevention says. The disease is most common in places with poor waste and health systems.

The U.N. also plans to provide "material assistance" to aid Haitians most affected by the epidemic.

Brian Concannon is the director of the Institute for Justice and Democracy in Haiti. The nonprofit organization supports Haitian cholera victims and their relatives. He told VOA that, at one point, half of the expected $400 million was promised to victims. That money would be used for either community projects such as new hospitals and schools or direct payment to the families.

But, since little money has been raised, Concannon said that some have warned the victims to lower their expectations. However, he said that "the cholera victims have a right to compensation under international law" and that the U.N. must obey this law.

Gabriel Thimothé is general director of Haiti's Ministry of Public Health. He said Haitians "have not given up hope" that the U.N. will meet its funding goal.

Right now, Thimothé said, the ministry is trying to reduce infections. It gave out a million vaccine doses in southern Haiti after the damaging hurricane last October. The U.N.'s World Health Organization provided the vaccines. And the ministry is planning a national vaccination program.

finance - v. to provide money for something or someone

toilet - n. a large bowl attached to a pipe that is used for getting rid of bodily waste and then flushed with water

feces - n. solid waste that is released from the body

dose - n. the amount of a medicine, drug, or vitamin that is taken or given at one time