Update Required To play the media you will need to either update your browser to a recent version or update your Flash plugin.
By Mario Ritter
08 March, 2017


A young man appeared in a YouTube video claiming to be the son of Kim Jong Nam, the half-brother of North Korea's leader.

In the video, the man says in English, "My name is Kim Han Sol from North Korea, part of the Kim family..." He then shows a passport that was partially blacked out. The passport is similar to passports issued to North Korea's government officials.

He says, "My father has been killed a few days ago. I'm currently with my mother and my sister" in the video.

The Associated Press reports that an unnamed official from South Korea's National Intelligence Service (NIS) has determined that the man in the video is Kim Han Sol.

A group named Choellima Civil Defense posted the video. The group says the governments of the Netherlands, China, the United States and a fourth unnamed country are providing humanitarian assistance to the family according to Reuters.

The appearance of the video adds to a complex chain of events and increasing tensions surrounding the death of Kim Jong Nam. Malaysian officials say Kim Jong Nam died after two women rubbed a deadly poison, VX nerve agent, on his face at the Kuala Lumpur airport. 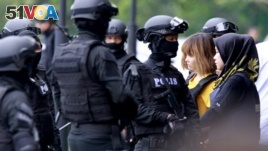 The suspects Siti Aisyah and Doan Thi Huong, second from right are escorted by police officers from Sepang court in Sepang, Malaysia on March 1, 2017.

A court in Malaysia has charged Siti Aisyah of Indonesia and Doan Thi Huong, from Vietnam, with the murder. The two women face a death sentence if found guilty.

Relations between Malaysia and North Korea have worsened as the investigation has continued.

On Tuesday, Malaysia barred all North Koreans in the country, including diplomats and embassy workers, from leaving. North Korea also has banned Malaysians from leaving its territory.

The decisions followed earlier moves to expel each other's ambassadors.

North Korea has claimed that the man, carrying a passport with the name Kim Chol, was not the half-brother of North Korea's leader Kim Jong Un. But it has asked Malaysia to return the body.

Officials in Malaysia want to question several North Korean suspects in the case. Officials are also waiting for a DNA sample from a family member to identify the body.

Mario Ritter adapted this story for VOA Learning English with reporting from VOA, Reuters and the Associated Press. Hai Do was the editor.

determine –v. to find out

issue –v. to make available, to be given out

DNA –n. (deoxyribonucleic acid) molecules that carry genetic information in the cells of plants and animals