Update Required To play the media you will need to either update your browser to a recent version or update your Flash plugin.
By Mario Ritter
06 March, 2017

Japanese Prime Minister Shinzo Abe said three of the missiles came down in his country's waters. He said they landed in Japan's Exclusive Economic Zone about 350 kilometers from the Japanese mainland.

"The launches are clearly in violation of (United Nations) Security Council resolutions. It is an extremely dangerous action," Abe said during questioning in parliament.

Also reacting, the United States said North Korea's provocations "only serve to increase the international community's resolve...Our commitment to the defense of our allies, including the Republic of Korea and Japan...remains ironclad," said State Department acting spokesman Mark Toner.

Toner added, "We also call on the DPRK (Democratic People's Republic of Korea) to refrain from provocative actions and inflammatory rhetoric that threaten international peace and stability, and to make the strategic choice to fulfill its international obligations and commitments and return to serious talks." The North Korean missiles traveled about 1,000 kilometers from where they were launched, in the northwestern part of the country. Their flight path suggests that they were not long-range intercontinental ballistic missiles (ICBM), however.

The launches took place as South Korea and the United States are holding joint military exercises. The North Korean government says the exercises are reason for North Koreans to prepare for an invasion.

The missile launches on Monday were not unexpected.

Bruce Bennett of the RAND Corporation research group told VOA that the most recent launches may have been an attempt to pressure China.

"This was a launch that was intended to defy the United States and South Korea for doing the ongoing exercises, but it was also clearly pointed at China."

Last month, China said it would suspend coal imports from North Korea. Coal exports are an important way for the North Korean government to earn money.

Experts said China's move was to punish the North for the apparent killing of the half-brother of North Korean leader Kim Jong Un.

Malaysian officials say Kim Jong Nam died after being attacked by two women at the Kuala Lumpur international airport last month. They have blamed the banned nerve agent VX for his death.

Malaysia is seeking several North Koreans for questioning and has refused to release the body to North Korean officials.

North Korea has increased activities in both its nuclear and missile programs since the start of 2016.

It has tested more than 25 missiles during that time. In February 2016, the North launched a satellite into space using ballistic missile technology banned by United Nations resolutions. 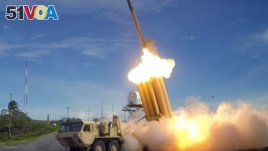 In reaction, the South Korean government approved deployment of the THAAD anti-missile system in the country. The costly defense system is designed to protect South Korea from the North Korean missile threat.

However, China opposes the placement of the missile system near its borders. Russia also has voiced concerns.

He added, "It is a challenge against the international community and a grave act of provocation."

South Korea remains in a political crisis. President Park Geun-hye has been critical of North Korea's banned nuclear and missile activities during her term in office. She has pushed for the THAAD missile system and closed the Kaesong economic area jointly operated with the North.

But she is fighting impeachment on corruption charges. The country's constitutional court is now considering the case against her. If Park is removed from office, the country will be required to hold its presidential election earlier this year than planned.

exclusive – adj. available to only one person or group

ironclad –adj. very strong and secure, too strong to change

obligations – n. things that are required to be done by a rule or law

defy – v. to refuse to obey

challenge – n. the act of questioning authority or some action

impeachment – n. the action of charging a public official with crimes while in office