Update Required To play the media you will need to either update your browser to a recent version or update your Flash plugin.
By John Russell
30 October 2021


A careful study of a large area in Mexico has found hundreds of ancient ceremonial centers.

The new findings include a large center at an important place for the ancient Olmec culture that is known for its large stone statues of heads.

The study involved a technology called lidar. It found 478 ceremonial centers in areas that were home to the ancient Olmec and Maya cultures dating from 3400 hundred years to 1400 years ago. The study was the largest of its kind involving ancient Mesoamerica, covering all of the state of Tabasco, southern Veracruz and parts of Chiapas, Campeche and Oaxaca. 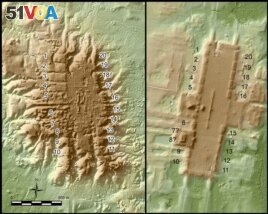 A June 2021 lidar-based imaging taken from above shows the ancient Olmec site of San Lorenzo (left) in Veracruz state and the ancient site of Aguada Fenix in Tabasco state in the western Maya area in this handout image. The numbers mark newly identified structures (Takeshi Inomata/Handout via REUTERS)

Lidar is short for Light Detection and Ranging. It uses a laser and data gathered while flying over a place to create three-dimensional information about the surface. The technology is able to "see" through thick plants and trees that cover structures below.

Takeshi Inomata of the University of Arizona led the study. It was published in Nature Human Behaviour.

The Olmecs represent the oldest-known major Mesoamerican culture. Scientists say the people are believed to have had an effect on later cultures, including the Maya.

The ceremonial center in San Lorenzo measures about 1,000 meters by 275 meters. The areas around it may have had houses, Inomata said.

The Olmecs carved heads from individual boulders, or very large rocks. The heads are among the most famous art from ancient Mesoamerica. The faces are carved in such a way that experts believe they represent ancient Olmec rulers.

Ten of the heads have been discovered at San Lorenzo. Inomata said there may be more of them that remain undiscovered.

Many of the hundreds of ceremonial structures identified in the study share common designs with that at San Lorenzo. Many appear to have been built in a way that goes with the direction of the sunrise on important ceremonial dates.

"These centers were probably the earliest material expressions of basic concepts of Mesoamerican calendars," Inomata said, noting that such calendars were based on 20-day periods.

An even larger ceremonial center, described by Inomata and his co-researchers last year, was found in the Maya area called Aguada Fenix in Tabasco near the Guatemalan border. It is not as old as the one at San Lorenzo. That find and others suggest that Olmecs and other peoples in the area exchanged ideas.

Lidar has been increasingly useful for archaeologists.

Juan Carlos Fernandez-Diaz is a Lidar engineer and co-writer of the study.

The technology's main strength, he said, "is that it provides a three-dimensional, birds-eye view of the landscape and modifications to it made by humans - ancient and modern - in the form of building, transportation, agricultural and water control infrastructure."

Lidar permits "us to 'see' the landscape and infrastructure" hidden under forest cover around the world, he said.

Will Dunham reported on this story for Reuters. John Russell adapted it for Learning English. Caty Weaver was the editor.

previous - adj. existing or happening before the present time

carve - v. to cut into a surface