Update Required To play the media you will need to either update your browser to a recent version or update your Flash plugin.
By Susan Shand
07 November, 2017


Catalonia's effort to separate from Spain became more complex Sunday when the former president of the region, Carles Puigdemont, surrendered to police in Belgium. Puigdemont had fled to Brussels from Spain last week.

Spain ordered the arrest of Puigdemont and other Catalan leaders. They are accused of rebellion.

As Madrid seeks to stop the drive toward Catalan independence, similar movements, such as in Scotland, are watching with interest. 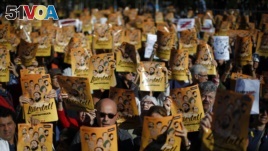 Demonstrators holding banners that read in Catalan: "Freedom for the Political Prisoners," are seen during a protest against the decision of a judge to jail ex-members of the Catalan government, at University square in Barcelona, Spain, Nov. 5, 2017.

On the streets of Scotland's biggest cities, Edinburgh and Glasgow, the Scottish flag has flown alongside the Catalan flag to show support for the separatists.

"Whether it's the Basque Country, Catalonia, Scotland, and then going elsewhere to Palestine, to Kurdistan, they all have the right to exist as nations," she said.

Scotland already enjoys some autonomy from Britain. The British government approved Scotland's plan to hold an independence vote in 2014. The Scottish people chose to remain part of Britain.

Bamberry said the Spanish Prime Minister may have been able to dissuade Catalans from seeking independence had he been more respectful of them. He said the government acted too strongly. That angered Catalans and intensified their support for independence.

"If Scotland had voted for independence, we know that Britain would have allowed it...But Spain said absolutely no way, we're not even going to give that vote," he said.

And, he said, the international community supported Spain's government because it did not want to deal with European problems.

In Belgium, tensions between the Flemish-speaking north and French-speaking south also may threaten the country.

Ker-Lindsay said that other movements are troubled by events in Spain. The violence following the vote, and the reaction of the international community, demonstrate the difficulty in gaining independence.

The European Union supported the Spanish government. However, Chris Bambery argues, history shows it is better to be sympathetic to people who seek independence.

He said, "The EU can look back in 1989 and say when the Soviet Union collapsed, actually the Baltic states and other countries got their independence peacefully."

Both Catalonia and Scotland are wrong to believe the EU will help them become independent, argues Ker-Lindsay. He said the EU does not have the power to decide questions of independence.

Ker-Lindsay added that the EU is already worried about the British decision to leave the EU, and the migrant crisis.

E.U. worries may grow: The Scottish National Party is proposing to hold another independence vote after Britain leaves the EU. If it succeeds, it may inspire the Catalans to fight harder to separate.

Reporter Henry Ridgwell wrote this story for VOANews. Susan Shand adapted it for Learning English. Caty Weaver was the editor.

autonomy – n. the power or right of a country, group, etc., to govern itself

inspire – v. to cause someone to have a feeling or emotion