Update Required To play the media you will need to either update your browser to a recent version or update your Flash plugin.
By Phil Dierking
06 November, 2017


Many famous people and a top United States official are among those on a list of people shown to have money in foreign banks to avoid taxes.

The financial documents have been called the "Paradise Papers." They are mainly from the legal company Appleby in Bermuda. Millions of documents were leaked to Germany's Sueddeutsche Zeitung newspaper on November 5. The newspaper shared them with the International Consortium of Investigative Journalists.

The documents give financial details of many famous people, officials and leaders. The information includes how much money these people have secretly kept in offshore accounts.

Appleby advises wealthy people on international financial transactions. These deals can help people avoid paying some taxes in their home countries that are tied to their investments.

Appleby says it has investigated all the accusations and found "there is no evidence of any wrongdoing, either on the part of ourselves or our clients."

Shamalov is executive and part-owner of the Russian energy company Sibur. He also is the son-in-law of Russian President Vladimir Putin. 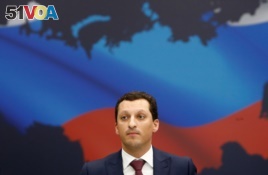 FILE - Kirill Shamalov, an executive of Russian energy company Sibur and husband of one of Russian President Putin's two daughters, attends a session of the National Oil and Gas Forum in Moscow, Russia, April 20, 2016.

The 79-year-old Ross is a former businessman and a billionaire. He has an investment in partnerships valued between $2 million and $10 million in the shipping company, Navigator Holdings.

Navigator Holdings earns millions of dollars a year transporting natural gas for Sibur. The documents also say Sibur is co-owned by Gennady Timchenko. He is a Russian billionaire who was tied to a large state-run company before the fall of the Soviet Union.

Timchenko is subject to U.S. sanctions because of Russia's 2 014 occupation of Ukraine's Crimean Peninsula. The occupation was followed by conflict between pro-Russian separatists and government forces in Ukraine.

Ross sold many financial investments when he joined the administration of U.S. President Donald Trump earlier this year. Ross sold them to avoid a conflict of interest.

Ross did not disclose the Russian business link when the U.S. Senate confirmed him as commerce secretary. The link was discovered this weekend after the Appleby documents were leaked.

A Commerce Department spokesman said Ross has removed himself as secretary from matters related to trans-oceanic shipping.

The report of Ross' financial connection to Russia comes as a special prosecutor, Robert Mueller, and three congressional groups carry out separate investigations. They are investigating efforts by Russia to interfere in the 2016 U.S. presidential election.

The far reaches of the "Paradise Papers"

The documents show financial information about individuals outside the US.

The Associated Press reports that the papers show Britain's Queen Elizabeth II has invested about $13 million of her private money in tax havens in the Cayman Islands and Bermuda.

Duchy of Lancaster, which oversees her finances, confirmed these activities but said that all their investments are legal. 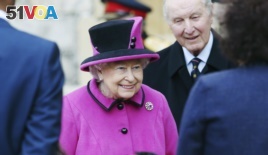 Britain's Queen Elizabeth II meets recipients of Motability vehicles as she arrives in the Quadrangle for a ceremony at Windsor Castle.

The papers also say the musician Bono, of the rock band U2, used a company based in Malta to buy part of a shopping mall in Vilnius, Lithuania.

Bono's spokeswoman confirmed to The Guardian newspaper that the musician invested in the Maltese company Nude Estates Ltd. The company sold its assets in 2015.

Putting pressure on the world leaders

The new disclosures may put pressure on world leaders.

E.U. countries had been trying to reach an agreement on tax havens by the end of 2017. European officials are seeking to deal with the problem of tax avoidance that received attention after the release of the "Panama Papers."

The so-called "Panama Papers" were millions of financial documents leaked last year. The documents gave information of tax-avoidance activities of many famous people and officials.

The European Commission wants to make a list of tax free or low-tax countries including those that do not cooperate with the EU.

The EU hopes the threat of being on a blacklist would discourage individuals and companies from putting their money in those countries or territories.

Currently, Reuters reports that the proposed EU blacklist would apply only to non-EU countries. Low-tax countries such as Luxembourg, Malta and Ireland would not be included.

This story was originally written for VOANews by Ken Bredemeir. Phil Dierking adapted the story for VOA Learning English. Mario Ritter was the editor.

Do you think wealthy people or companies should be allowed to invest money in offshore accounts? We want to hear from you. Write to us in the Comments Section or on 51VOA.COM.

blacklist - n. a list of people, organizations, etc., that are disapproved of or that are to be punished or avoided

clients - n. a person who pays a professional person or organization for services

disclose - v. to make something known to the public

discourage - v. to make someone less determined, hopeful, or confident

tax haven - n. a country or independent area where taxes are levied at a low rate.

sanction - n. an action that is taken or an order that is given to force a country to obey international laws by limiting or stopping trade with that country, by not allowing economic aid for that country, etc.