How Second-Year Students Spend Their First Year on Campus

Update Required To play the media you will need to either update your browser to a recent version or update your Flash plugin.
By Dan Friedell
06 November 2021


Jheannelle Johnson, a second-year student at Howard University in Washington, D.C., was nervous about taking tests known as "midterms." The tests cover the first part of her school year.

Speaking from the school's bookstore, she told VOA that she planned to spend the rest of the day in late October studying for them.

"It's definitely been a transition because I haven't sat in a real classroom in almost two years. So, it was kind of a rough adjustment at first. I took my first in-person test and I had major test anxiety. It was almost like having to re-learn how to walk." 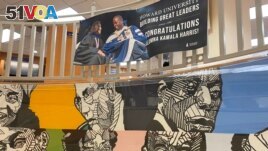 A mural at the Howard University bookstore in Washington, D.C., along with a banner celebrating graduate Kamala Harris.

For first-year students, also known as freshmen, midterms can cause concern, because they are the first big test of their college years. Students in their second year of college, like Johnson, are known as sophomores. However, this year, some people are calling them "the other freshman class."

Johnson completed her first year at Howard by taking classes over video from home in Florida. She said professors understand that students from her class are still getting adjusted to life at college and life in Washington.

Mallika Gore is another member of "the other freshman class" at Syracuse University in central New York. Before coming to Syracuse, Gore lived with her parents in Mumbai, India. She also spent time as a child in Europe, Singapore and the American state of Ohio.

Gore arrived at Syracuse in January 2021. The snow and ice in Syracuse were a big change from the hot weather in India. She said it was hard to feel like a part of the college community because she took most classes by video and met very few students.

This school year, however, has been different. She said she feels more connected to the university with in-person classes and activities on and off school grounds. Even the weather was better!

"You're in-person with the teacher, so you can just ask questions, you can ask for tutors, you can go for their office hours and they can actually sit down and explain it to you and there's a lot more group discussion."

Syracuse officials said there were about 550 international students who started as undergraduates in 2020. The students were from 43 countries, including 300 from China. But only about 100 of them had come to New York to study by January 2021. Nearly all of them had arrived by August of this year.

Rob Hradsky is Vice President for the Student Experience at Syracuse. He said the university made a special effort this year to connect with second-year students.

There were trips to shop and eat in downtown Syracuse, pick apples at local farms and attend music performances. He said the students enjoyed all activities, including games, movies, ice skating and even Halloween.

Hradsky said he wanted to make sure international students, who took classes from home last year, learned about the school spirit.

"How do we introduce folks who are understanding of the academic experience, but not really understanding all that the campus can offer?"

Gore said she is trying to do as many non-academic activities as possible this year. She said she learned what "orange spirit" was when she went to her first football game.

"There was a band playing, there was Otto the Orange going around. There were cheerleaders and the stadium was huge and packed."

At Howard University, Johnson said she was excited to feel the school spirit, too. Johnson went to a gathering called a "pep rally" during the recent homecoming weekend. Homecoming is a tradition in which graduates come back to celebrate their university.

But in October, Johnson also saw something she was not able to experience last year from home: a student protest. The students say the college is too costly and its housing is not in good shape. They want a stronger voice and set up camp inside and outside an administration building.

"We feel like it's almost a responsibility to speak up, so that way, not only our class can benefit but other classes after ours can."

After two months in Washington, D.C., Johnson said she is happy to be living the college life on campus instead of taking classes from home.

"There's so much more to do here than there was at home," she said. "So, anytime I go outside, I know there's something that I could be doing."

What would you do to help "the other freshman class" get comfortable at college this year? Tell us in the Comments Section and visit 51VOA.COM.

midterm – n. an examination given at the middle of a school term

adjustment – n. a change that makes it possible for a person to do better or work better in a new situation

tutor – n. a teacher who works with one student

folks – n. informal for people or a group

stadium – n. a very large usually roofless building that has a large open area surrounded by many rows of seats and that is used for sports events, concerts, etc.

packed – adj. full of people : filled with as many people as possible

pep rally – n. an event before a school sports event that is meant to get students and fans excited and to encourage the team to win