In Ecuador, Families Wait with Their Dead as Bodies Pile Up

Update Required To play the media you will need to either update your browser to a recent version or update your Flash plugin.
By Susan Shand
10 April 2020


Daniel Larrea died recently after several days of high fever and struggling to breathe while slowly turning blue – signs of being infected with the new coronavirus.

Then his family found an unexpected problem: No one in their city of Quito, Ecuador would pick up his body.

"We wrapped him up in black plastic," Larrea's wife, Karina, said. 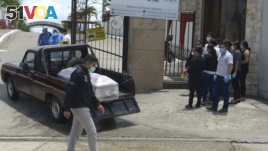 The small South American nation has recorded only 120 deaths from COVID-19. But officials say there could be many more who died from the virus. Nationwide, there were 3,160 cases confirmed last week. The real numbers are likely higher.

Doctors say there are not enough tests in the country. This makes it difficult to identify and isolate the sick to try to stop the spread of COVID-19. There are also not enough hospital beds or medical equipment.

"We are seeing a situation quite similar to that of Italy," said Dr. Mireya Rodas. She treats patients at a Guayaquil hospital.

Ecuador identified its first case of COVID-19 on February 29, a 71-year-old woman from Spain. Ecuador was one of the first Latin American countries to confirm the arrival of the disease.

Medical experts fear the problems in Guayaquil may be what awaits the country in coming weeks and months. The area has 70 percent of the virus cases in the country.

Enrique Acosta is a researcher at the Max Planck Institute for Demographic research in Germany. He expects there will be more deaths from the disease.

Acosta is among a group of experts urging Latin American governments to quickly increase testing. They believe the true number of coronavirus cases in Ecuador could be five times the official count or higher.

Health officials defended Ecuador's reactions to the growing number of cases. They said new technology would soon permit testing to increase to 1,400 a day.

Meanwhile, many Ecuadorians are dying of unrelated diseases. They cannot be treated because hospitals are crowded with coronavirus patients.

Seventy-one-year-old Carmen Suarez recently died at her home in Guayaquil. Her family believes it was kidney failure. Before she died, family members tried to find a hospital that would accept her, but there were no beds available. They were told that taking her to a hospital would be very risky because of the spread of coronavirus.

Esteban Ortiz is a public health specialist. He said there was only enough medical equipment for 175 patients in Guayas which includes Guayaquil.

He said, "We're not giving them a chance to come and get medical attention."

coffin – n. the wooden box bodies are buried in

isolate – v. to remove from the presence of other people

kidney – n. either of two organs in your body that remove waste products from your blood and make urine