Update Required To play the media you will need to either update your browser to a recent version or update your Flash plugin.
By Dan Friedell
22 July 2022


Pope Francis begins his trip to Canada on Sunday.

The leader of the worldwide Roman Catholic Church is going to Canada to apologize for the way Catholic religious workers, or missionaries, treated indigenous people there in the past.

The job of a Catholic missionary is to spread Catholic religious beliefs. The goal is to get people to become Catholics. In their work, missionaries set up religious schools in Canada that operated for over 100 years, ending in the 1970s. The missionaries separated indigenous children from their families and forced them to attend the Catholic schools. The schools were called "residential" schools because the young people lived there. Because they were away from home, the children were not able to learn traditions from older family members and community leaders. 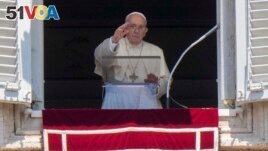 Pope Francis delivers his blessing as he recites the Angelus noon prayer from the window of his studio overlooking St.Peter's Square, at the Vatican, Sunday, July 17, 2022. (AP Photo/Andrew Medichini)

While the Pope is in Canada, some indigenous groups plan to ask him to return art objects from their ancestors. Some Catholic leaders say the pieces of art were gifts sent back to Europe to be included in a 1925 event at the Vatican. Others disagree.

Michael Galban is a Washoe and Mono Lake Paiute. He also heads the Seneca Art & Culture Center in New York state. He said it is hard for him to accept that "there wasn't some coercion going on in those communities to get these objects." Coercion means to make someone do something by force or threats.

Gloria Bell is with the American Academy in Rome and assistant professor at Canada's McGill University. She said: "Using the term ‘gift' just covers up the whole history." Bell added, "We really need to question the context of how these cultural belongings got to the Vatican."

Many thousands of artworks and artifacts are kept in a little-visited museum called Anima Mundi inside a group of Vatican buildings within Rome. Anima Mundi is a Latin phrase that means "Soul of the World" in English.

The groups asking for the return of the artifacts include the Metis, who are one of the three large indigenous people of Canada.

It is the second time the Metis will ask the Pope to return the objects. Metis representatives asked the Pope to send the artifacts home last spring during a visit to Italy.

Cassidy Caron is president of the Metis National Council. She said, "the pieces that belong to us should come home."

She said that when the objects come home, her people will be able to tell their story more openly. "We had to hide our culture and hide our traditions to keep our people safe," Caron said. Now that the indigenous people of Canada can speak freely about themselves, they want to explain what the objects are, what they mean and how they are used in ceremonies. In the past, Caron said, many Metis people had to hide their traditions because they were afraid.

The Canadian government has also admitted to working to move the native people into Canadian society in the 1800s and 1900s. For example, the government banned a special ceremony called Potlatch, which it said was too destructive, in 1885. Agents took away special objects that were used in the ceremonies, such as masks, that eventually appeared in private collections and museums in Canada, the U.S. and Europe.

What is in the museum?

Some of the artifacts in the Vatican Museum include walrus tusks, animal skins and special head coverings used for ceremonies. The Vatican says those items were gifts for Pope Pius XI, who served as the Church's leader from 1922 to 1939. Other objects in the collection go back to the 1600s.

One report from a Canadian newspaper in 2021 showed a boat used by the Inuit people of Canada in the museum.

The indigenous leaders say they only know about the objects being shown. They say there could be many more in holding places.

The Vatican News said some objects have been sent back to their people. For example, in 2021, the Church sent a shrunken head used in religious ceremonies back to the Jivaroan people of Ecuador.

She showed a display of beaded belts used as money by native peoples and sticks used as weapons.

The museum would not speak with the Associated Press for this story. But in a 2015 listing of the objects it has from the Americas, the museum said the good condition of the artifacts shows how much the Church cares about world cultures.

Pope Francis in 2019 said the native peoples' artifacts held by the Catholic Church are cared for in the same way as "the masterpieces of the Renaissance or the immortal Greek and Roman statues." He also noted that the museum is open about the objects it holds, and visitors can see the holding areas through glass dividers.

However, most people who visit the Vatican do not see the collection because it is not popular. Guides do not show visitors Anima Mundi because the displays do not have writings that explain where the artifacts come from and what they were used for.

One native person from Australia, named Neale, said the artifacts are "not being given the respect they deserve by being named in any way." He called the display beautiful but said the collection only shows how the pieces are "exotic" but without more information the objects are "culturally diminished."

It is not clear if informational writing will be added to the collection.

Museums in other European nations are making changes to their collections of artifacts from native people. Germany, the Netherlands and Belgium are attempting to return objects. Many objects were collected during colonial times.

For example, France and Germany announced a plan in late 2021 to return special religious pieces to Nigeria.

Jos van Beurdon follows the efforts some countries are making to return objects to the people who once owned them. He runs the social media group called Restitution Matters.

"There is a certain willingness growing in a number of European countries to return objects...," he said.

A Vatican spokesperson, Matteo Bruni, said the Pope might bring some objects to Canada during the trip. "We'll see what happens in the coming days," Bruni said.

Gregory Scofield is a member of the Metis community from the Canadian province of British Columbia. He is working with the Royal British Columbia Museum to help other indigenous people get back their traditional objects.

He worked to recover over 100 beaded Metis objects that were made between 1840 and 1910. He bought them online and in his travels. Metis scholars and artists can study the collection so they can learn more about the objects.

tusk – n. a very long, large tooth that sticks out of the mouth of an animal (such as an elephant, walrus, or boar)

diminish – v. to make smaller or to lessen

restitution– n. the act of returning something that was lost or stolen to its owner

scholar– n. a person who has studied a subject for a long time and knows a lot about it