Yazidis Exchanged for IS Prisoners

Update Required To play the media you will need to either update your browser to a recent version or update your Flash plugin.
By Jim Dresbach
30 March, 2016


More than 50 Yazidi women and children were exchanged last week for Islamic State prisoners held by Kurdish forces in Syria.

Two IS commanders were exchanged for the women and children.

Kurds holding the two were part of the armed wing of the Syrian Kurdish Democratic Union Party, known as the YPG. 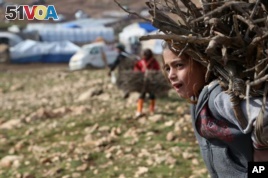 The women and children were returned home to Sinjar in northern Iraq. Sinjar is the main city for Yazidis in Iraq. It was liberated from IS last year by Kurdish Peshmerga forces. Those fighters are supported by the U.S.-led coalition.

The Yazidis were taken from the same town 19 months ago, according to a Kurdish news agency.

"I have talked to some of them yesterday," said Dawud Sheik Kalo, a Yazidi fighter. He said the women and children are safe.

A former prisoner told the Kurdish news agency she spent nine months in Iraq and 11 months in Syria.

A teenage Yazidi girl said her family was taken by IS.

"After we got to Syria, they separated the men from us," she said. Media reports made no mention of Yazidi men being a part of the exchange.

Thousands of Yazidis were abducted or killed by IS in northern Iraq beginning in 2014. Women and girls were forced into sexual slavery by IS members, human rights groups say.

liberate – v. to free someone or something from being controlled by another person or group

abduct – v. to take someone away from a place by force