Iraqi officials say a bomb explosion killed at least 67 people in a Shi'ite Muslim neighborhood of Baghdad Thursday. Many more were wounded. Officials say the explosives were in a truck that blew up at the crowded Jameela market in Sadr City.

The Islamic State group said it carried out the attack. The Sunni militant group considers Shi'ites to be heretics.

The Iraqi government is fighting alongside Shi'ite militia against the Islamic State group in several provinces. A U.S.-led campaign of airstrikes also is targeting the extremists.

A new study says only one in three Americans approves of how President Barack Obama dealt with the agreement on Iran's nuclear program. The Gallup research organization did the study.

The pollster questioned more than 1,000 people in recent days. It said Thursday that 55 percent disapproved of Mr. Obama's Iran policy and 33 percent approved of it.

The finding is similar to a study by Quinnipiac University. It said twice as many Americans oppose the international agreement with Iran as support it. The U.S. Congress plans to vote next month on whether to approve or reject the deal. 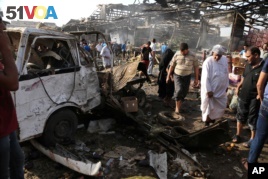 Some wreckage from a bomb explosion at a market in Baghdad, Iraq, August 13.

Al Qaida leader Ayman al-Zawahiri reportedly has promised allegiance to the new head of the Taliban.

The al Qaida leader appears to have made the statement in an online voice recording. The recording expresses support for the choice of Mullah Akhtar Mohammad Mansour to replace supreme leader Mullah Mohammed Omar who, the Taleban said, died in late July.

US flag to fly Friday in Cuba

The U.S. flag will be raised Friday in Cuba. Cuba and the United States re-established diplomatic relations for the first time since the nineteen sixties. Secretary of State John Kerry will raise the flag over the U.S. embassy in Havana.

Cuban dissidents have not been invited to the flag raising ceremony.
Mr. Kerry is to meet with a small group of the dissidents at the home of the chief of the U.S. mission later Friday.

Former U.S. President Jimmy Carter announced Wednesday that he has cancer. He said it was discovered recently during liver surgery.
In a short statement, Mr. Carter did not say what kind of cancer he has. A more complete public statement will be made when facts are known, possibly next week, he said.

The former president established the Carter Foundation after leaving the White House in 1981. He has traveled the world working on issues like health care, democratic reform, women and children's rights, and affordable housing.

heretic – n. someone who believes or teaches something in opposition to official (religious) beliefs

pollster – n. a person or group who carries out a poll, a public opinion study

allegiance – n. loyalty to someone or something

resumption – n. to restart something that had been stopped