Update Required To play the media you will need to either update your browser to a recent version or update your Flash plugin.
By Matthew Caputo
30 July 2022

They are trying to prevent erosion that threatens parts of West Africa's Atlantic coast.

In West Africa, the coast is home to more than half of the economic activity. And about one third of the population lives along the coast. In some areas, half-covered trees and flooded buildings show what erosion has done. 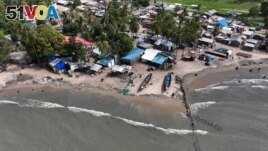 Wooden structures using the Maltais-Savard Ears System that is used to limit the erosion of the shoreline, in Diogue island, Senegal July 14, 2022. (REUTERS/Zohra Bensemra)

Angele Diatta is head of the women's group in the village of Diogue Diola. She said, "The ocean was so far away that we used to hear it without seeing it." Now, high tides sometimes move through homes in the village.

Many rivers feed into the ocean along the West African coast. The United Nations says this makes it among the areas most affected by rising sea levels, increasing saltwater, and flooding.

On Diogue Island, a method of driving groups of wooden sticks into the wet sand is helping to protect some areas on the island. The project's organizers say these areas have expanded by around 30 meters since 2019.

Gilbert Bassene is a primary school teacher who has been helping build the defenses against the sea. He described the process of expansion. "Whenever we gain ground, we can extend the structure, add more sticks, as they say little by little the bird makes its nest."

These barriers are based on a model created in Canada. A study by scientists at the University of Quebec said the method protects coasts without causing the loss of sediment in other places. The coconut fronds trap sand on the beach, preventing it from washing away.

"With the little that we have, we can achieve extraordinary work," Bassene said on the coast, where children had gathered to watch him work.

A 2020 study published in the Journal of Coastal Conservation found that efforts like those by the people of Diogue are not enough. Coasts in West Africa are still shrinking.

Some people on Diogue do not believe they can beat this problem. The village chief, Cherif Diatta, said: "It's not easy to admit, but one day the village will have to move."

erosion – n. the slow destruction of something by natural forces

achieve– v. to get or reach (something) by working hard