K-pop Fans Worry About Bands’ Involvement in US Politics

Update Required To play the media you will need to either update your browser to a recent version or update your Flash plugin.
By Mario Ritter Jr.
24 June 2020


Some followers of Korean popular music, known as K-pop, have been using social media to get active in American politics. But in South Korea, K-pop fans are concerned that their favorite artists will get pulled into foreign political battles.

Fans of Korean pop artists have made appeals around major political movements in the United States in recent weeks. They used their online communities and mobile technology to ask for public support and donations.

The issue gained attention after an election campaign event last Saturday in Tulsa, Oklahoma. U.S. President Donald Trump went there to speak with his political supporters. K-pop fans and users of the video sharing app TikTok claimed partial credit for reporting that large numbers of Trump supporters planned to attend the event. In fact, the size of the crowd was smaller than what organizers had expected.

Some people were said to have commented online that they claimed tickets so that Trump supporters could not attend the gathering.

Fans worry about influence of politics

Fans of the Korean pop artists BTS and other groups have been active online in support of social causes. Earlier this month, fans of BTS donated money to the Black Lives Matter campaign. They wanted to match the group's earlier donation of $1 million.

Black Lives Matter calls itself an international organization aimed at supporting black communities. Fans went on social media to voice support for the group's opposition to racism and police violence.

Jung Duk-hyun is a South Korean culture critic. Jung notes that the millennial generation uses mobile-based communications as a "means to quickly spread their political voices and mobilize support."

The donation to Black Lives Matter matches earlier efforts by BTS and other K-pop groups to support social and humanitarian causes. In the past, they donated money to help Syrian refugees and campaigns to stop violence against children. 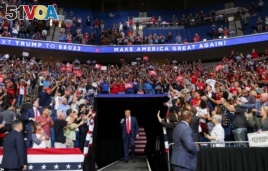 U.S. President Donald Trump pumps his fist as he enters his first re-election campaign rally in several months in the midst of the coronavirus disease outbreak, at the BOK Center in Tulsa, Oklahoma, U.S., June 20, 2020. (REUTERS/Leah Millis)

But the incident with the Trump campaign event has started a debate among K-pop fans in South Korea. They do not appear to have been involved in any large way in that effort. Young South Korean artists rarely get involved in their country's politics. And many internet gathering forums for fans ban political discussions.

"We're proud that BTS leads those efforts as global artists and do want to raise voices together on universal issues that earn everyone's sympathy," Chang told the Reuters news agency. But the student thinks the singers should not be used in U.S. politics.

"...Artists should stay away from domestic politics," Chang said, worrying that they could be used for political purposes.

An official with Big Hit Entertainment, the company that helps oversee BTS, did not comment to Reuters.

On Monday, an American reporter, Rosanna Scotto, asked another K-pop group, TXT, about the Trump campaign event last weekend. Group members looked unsure and did not answer the question.

Some fans criticized Scotto for asking a question about U.S. politics.

BTS's campaign to help Black Lives Matter, or BLM, has received support from K-pop fans. But some fans are urging those in the United States to stop "forcing others to give money" and to respect the rights of individuals to express themselves.

On Monday, one fan expressed concern on BTS's official fan community app, called Weverse. "BLM was understandable as it was about human rights, but it makes me uncomfortable to see my idols pop up in Trump-related news," the fan wrote.

mobile – adj. relating to handheld computers and other wireless technology

ticket – n. a piece of paper that gives the holder a right, such as entering a place or traveling on a train or airplane

millennial – adj. describing a person who has become an adult around the year 2000

forum – n. a meeting place where ideas can be exchanged

proud – adj. feeling pleasure or satisfaction as a result of one's actions

domestic – adj. in one's own country, not in a foreign country

uncomfortable – adj. causing a feeling of unease or worry