Fashion Industry Clears Its Calendar, Looks to Other Changes

Update Required To play the media you will need to either update your browser to a recent version or update your Flash plugin.
By Pete Musto
21 June 2020


From Armani to Gucci, top fashion houses are slowing the rate at which they hold fashion shows and launch new lines of clothing.

The move comes as the coronavirus health crisis forces the fashion industry to re-think the way it operates.

High-end designers are reducing the number of collections they show at fashion weeks throughout the year in London, Paris, Milan, and New York City.

It has been more than two months since health officials around the world announced stay-at-home orders to limit the spread of the coronavirus. Since then, many stores have been closed, and fashion houses have suspended work at factories that manufacture their products. Bain & Company, a business advisory service, estimates the $310 billion luxury goods industry will report a drop in sales this year of up to 35 percent.

Fashion houses are struggling with lots of unsold products. And the possibility of price cuts on high-end goods could damage their public image as well as harm profits.

Designer Michael Kors was the latest to call for a post-virus slowdown in the fashion calendar. His business pulled out of New York's fashion shows in September.

Kors said he would only make two collections a year – one for spring and summer, and one for autumn and winter. This means no longer producing "resort and pre-fall" collections. These collections offer holiday wear for foreign travel. They have added to the number of designers' creations that critics say do not meet people's needs, especially in a recession. 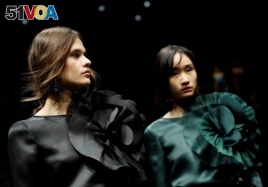 Robert Burke is founder of Robert Burke Associates, a service that advises luxury sales businesses. He told the Reuters news agency the move towards fewer collections is linked to the public's move away from disposable fashion.

The debate about the nature of the fashion industry pre-dates the coronavirus. But it has been given a sense of urgency by the health crisis, which is pressuring companies to cut costs and sell products without losing too much money.

Kors said shipments of his products would from now on arrive in stores slowly over the spring/summer and autumn/winter seasons. This more closely represents "how customers actually live and shop," representatives of his company said.

"It makes no sense for one of my jackets or suits to live in the shop for three weeks before becoming ... replaced by new goods that are not too different," he wrote.

Alessandro Michele, who made Gucci highly profitable for French owner Kering, has said he would cut the company's yearly shows from five to two.

And in its end-May earnings presentation, Ralph Lauren said it was working on less seasonal products, and more clothing that has all-around use. Lauren's chief financial officer Jane Nielsen said the summer collection would stay in stores through August.

Companies like Gucci and LVMH's Dior have used more frequent collections and costly events in untraditional places to appeal to wealthy buyers, especially in China.

With luxury spending hit by the crisis, some industry insiders say it no longer makes sense to have a huge advertising budget. A fashion show can cost well over $1 million.

The move towards showing and producing less also is evidence of a changing relationship between fashion companies and big department stores in the United States. The stores' owners long controlled the timing of product releases to keep their products looking fresh.

Ron Frasch, former president of Saks Fifth Avenue, said the health crisis has sped up the collapse of Neiman Marcus and other top U.S. stores. The old method of doing business is now increasingly being called into question, he noted.

Yet some fashion designers are resisting the call for a lighter fashion calendar. Chanel, which in a show of strength increased prices in May, said it would still release six collections a year.

Silvia Aloisi and Melissa Fares reported on this story for the Reuters news agency. Pete Musto adapted it for VOA Learning English. George Grow was the editor.

line(s) – n. a group of related products that are sold by one company

luxury goods – n. something that is expensive and not necessary

calendar – n. a list or schedule of events or activities that occur at different times throughout the year

disposable – adj. made to be used once or only a few times

shop – v. to visit places where goods are sold in order to look at and buy things

department store(s) – n. a large store that has separate areas in which different kinds of products are sold