New Zealand's Moviemaking Business Gets Back in Action

Update Required To play the media you will need to either update your browser to a recent version or update your Flash plugin.
By Caty Weaver
12 June 2020


The capital of New Zealand has enjoyed an exciting week since the arrival of a Hollywood filmmaking team. Canadian director James Cameron and his crew will begin filming a second part, or sequel, to his popular 2009 science fiction movie, Avatar.

The project is among a handful of film productions beginning in New Zealand as the nation reopens following its successful COVID-19 containment effort. The government hopes the country's film industry will help repair the economic damage blamed on the health crisis.

New Zealand's borders remain closed to foreigners but the government permitted the 55 member Avatar 2 team to enter. The group arrived on a private airplane. 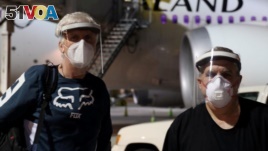 Canadian director James Cameron (L) and U.S. producer Jon Landau pose for a photo, while arriving at Wellington International Airport to resume the filming of the Avatar sequels. (Courtesy of Lightstorm Entertainment/Social Media via REUTERS)

Annabelle Sheehan, head of the New Zealand Film Commission, praised the return of the film business.

"Certainly, the fact that we are able to start earlier than some countries is great..." But she also expressed concern for the many countries that continue to face major difficulties from COVID-19.

New Zealand's high mountains, green valleys and thick forests were made famous by the series of movies The Lord of the Rings. The country has drawn several major film productions in recent years.

About 47 productions were in progress when Prime Minister Jacinda Ardern on March 26 ordered a travel ban and other restrictions to stop the spread of the coronavirus.

The public health efforts were a success and New Zealand's officials say the virus has been almost eliminated from the country. New Zealand was among the first nations in the world to return to normal this week, apart from the closed border.

Avatar producer Jon Landau posted a picture of himself and director Cameron after landing last week. He also said they would avoid contact with other people for 14 days as is the government rule for visitors.

Landau praised New Zealand's coronavirus campaign on Radio New Zealand. "Your country has become a leader in how to deal with something like this," he said, adding, "I think films will want to come."

With many people around the world stuck at home, pressure is on filmmakers and others to make new material and release it. Movie industry experts, however, say content creators are held back because of the lack of safe places to work.

Now, New Zealand appears to be a good possibility for such work.

"We've had a few international enquiries and that's on the back of our COVID-free status," said Gary Watkins. He is head of Avalon Studios based in Wellington. Avalon was used for the filming of the 2017 movie Ghost in the Shell starring Scarlett Johannsen. The company is also involved in making the new Avatar movie.

Wellington is home to major studios and production centers including director Peter Jackson's Weta Digital. The studio produced Jackson's The Lord of the Rings and The Hobbit movies.

But the admission of Cameron and his crew into New Zealand has been criticized. Opposition party leaders have asked why the movie crew was let in with seeming ease, while restrictions on other visitors, including family members of citizens remain. Many businesses in the country are struggling without employees needed for their operations.

Economic Development Minister Phil Twyford defended the decision on the Avatar film crew. He said the border was only open to a few foreigners who were important for projects with substantial economic value.

New Zealand's film industry is thought to be valued at more than one billion dollars each year. A six-month international film can create an estimated 3,000 jobs.

And New Zealand needs the jobs. The government expects joblessness to rise because of the coronavirus.

The tourism industry brings in more than $16 billion yearly, representing six percent of the value of all goods and services produced in New Zealand.

But in the longer term, the films should help the nation's tourism industry recover.

"People all over the world will see these new titles and will start seeing New Zealand in a new light...this will contribute hugely to tourism," Sheehan said.

eliminate –v. to remove (something that is not wanted or needed) : to get rid of (something)

content –n. the ideas, facts, or images that are in a book, article, speech, movie, etc.

enquiry –n. a request for information

trigger –v. something that causes something else to happen

tourism –n. the business of providing hotels, restaurants, entertainment, etc., for people who are traveling

title –n. the name given to something (such as a book, song, or movie) to identify or describe it

contribute –v. to help to cause something to happen