Karadzic Gets 40 Years For Muslim Genocide

Update Required To play the media you will need to either update your browser to a recent version or update your Flash plugin.
By Kathleen Struck
24 March, 2016


Radovan Karadzic -- the former Bosnian Serb leader -- was convicted Thursday of genocide and sentenced to 40 years in prison.

Karadzic has been called the "Butcher of Bosnia." He was found guilty for Serb atrocities during the war in Bosnia from 1992-1995. About 100,000 people died in that war.

The U.N. International Criminal Tribunal for the former Yugoslavia (ICTY) oversaw the trial. 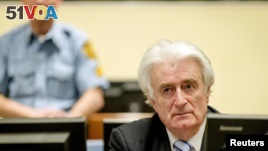 ITCY said the 70-year-old Karadzic was responsible for the crime of genocide in the 1995 Srebrenica massacre. Serb forces killed 8,000 Muslim men and boys, in what has been called the worst atrocity in Europe since the Holocaust.

Judge O-Gon Kwon said the Srebrenica massacre could not have happened without Karadzic's support.

However, Karadzic was found not guilty of genocide for driving Bosnian Muslims and Croats out of villages claimed by Serb forces.

Karadzic's was the most senior Bosnian Serb leader during the Bosnian War. He oversaw the Bosnian Serb army. The official commander of the army, former General Ratko Mladic, is also on trial for genocide in The Hague.

In 2014, Karadzic only admitted to "moral responsibility" for his wartime actions.

In an 874-page written statement at the International Criminal Tribunal for the former Yugoslavia, Karadzic said he was not aware at the time of the killing at Srebrenica.

Holocaust –n. the killing of millions of Jews and other groups by the Nazis during World War II