Kerry Tries to Save ‘Two State Solution’ for Israel, Palestinians

Update Required To play the media you will need to either update your browser to a recent version or update your Flash plugin.
By John Russell
11 January, 2017


Secretary of State John Kerry will join world leaders at a conference in Paris on Sunday.

The conference is to be one of Kerry's last missions as U.S. secretary of state.

Kerry will try to save what is known as the two-state solution. 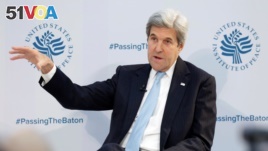 The two-state solution refers to a political deal in which Israel and a Palestinian state exist next to each other.

Many experts believe that the possibility of a two-state solution is disappearing. Neither Israeli officials nor Palestinian representatives will attend the Paris conference.

Israeli officials concerned about the conference

Israeli Prime Minister Benjamin Netanyahu and his supporters in Washington are concerned about the conference.

Last month, the United States allowed the passage of a United Nations Security Council resolution that was critical of Israel. Resolution 2334 demands an end to Israeli settlements. It calls these settlements a "violation under international law."

The United States has blocked similar resolutions in the past.

Kerry explained the action in a speech on December 28.

He said, "We cannot properly defend and protect Israel if we allow a viable two-state solution to be destroyed before our own eyes."

Israel worries the resolution could help the Boycott, Divestment, Sanctions , or BDS movement, which aims to put economic pressure on Israel.

Last week, the House of Representatives voted to condemn resolution 2334. Foreign Affairs Committee Chairman Ed Royce said this action was, in part, "to head off any more moves the Obama administration might have in the next few days."

To "head off" means to stop something from happening.

The Netanyahu government and its supporters still worry that during his remaining days in office, U.S. President Barack Obama might take some action related to the two state issue.

They are concerned he might formally declare recognition of a Palestinian state or support a French resolution in the U.N. Security Council that declares two states.

Ron Kampeas is the Washington bureau chief for the Jewish Telegraphic Agency. He says he thinks such an action by the Obama administration is not likely.

President-elect Donald Trump made it clear that he differs from the Obama administration on American policy toward Israel. After Resolution 2334 passed, for example, Trump wrote on Twitter, "As to the U.N., things will be different after Jan. 20th."

David Friedman, Trump's choice for ambassador to Israel, supports Israeli settlements. He has also said he opposes the two-state solution.

Is there a new Palestinian plan?

Uri Savir is an Israeli diplomat. He also established the Peres Center for Peace. He said a person inside the Palestinian Liberation Organization, or PLO, who did not want to be identified described a new Palestinian plan.

Savir wrote that PLO officials have developed a plan for a temporary agreement. The agreement would establish a Palestinian state until permanent negotiations could be launched a year from now.

Michele Dunne is director of the Middle East Program at the Carnegie Endowment for International Peace. She says this proposal probably does not interest the Israeli government.

Dunne says the proposal sounds like an attempt to keep the two-state solution alive.

mission –n. a task or job that someone is given to do

settlement – n. the act or process of moving to a new area or place to live there

divestment – n. the act of selling or giving away (possessions, money, etc.)

head off – phrasal verb to stop something from happening