Secretary of State John Kerry appealed to U.S. lawmakers Wednesday to support the international agreement with Iran. He spoke a short time after Maryland Senator Barbara Mikulski promised to support the nuclear deal when Congress votes on it. Her vote is important because it means at least 34 senators plan to support the agreement.

A majority of the Senate's 100 members could still vote against the deal. But President Barack Obama has said he would use his veto power to reject their "disapproval". With 34 votes, he can now be sure any attempt to overturn his veto will fail.

World powers and Iran signed the agreement in July. They agreed to ease international economic sanctions against Iran. In return, Iran promised to limit its nuclear activities. 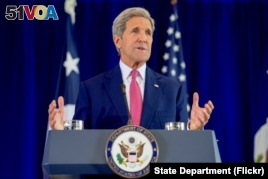 U.S. Secretary of State John Kerry delivers a speech about the Iran nuclear agreement before an audience of several hundred assembled on Sept. 2, 2015, at the National Constitution Center in Philadelphia, Pennsylvania.

The U.S. Congress will debate the agreement next week. Members of Congress have had 60 days to examine the document. Each member will vote for or against the deal.

Congressional Republicans oppose the deal. Critics say it does not prevent Iran from making nuclear weapons. They say Israel would be in danger. The country is about 1,500 kilometers from Tehran.

Mr. Kerry spoke about the agreement during a visit to Philadelphia Wednesday. He said the United States remains a strong ally of Israel. He said the U.S. sends more aid to Israel, including military aid, than all other countries combined.

The Associated Press reported that Mr. Kerry will send a letter to members of Congress. The letter reportedly will list U.S. security guarantees to Israel and the Gulf Arab countries.

Former U.S. Secretary of State Madeleine Albright told CNN on Monday that she supports the nuclear deal with Iran. Last month, The New York Times published a letter of support for the deal. The letter was written by 29 nuclear scientists in the United States. The Washington Post reported that more than 30 retired generals and admirals released an open letter in support of the agreement.

The American public seems split on the subject. A new survey found that 55 percent of Americans supported the deal, while 44 percent did not. The University of Maryland reported the findings.

If Congress voted against the deal, U.S. measures against Iran could remain in place. That would threaten the nuclear agreement.

The United Nations Security Council expressed support for the agreement in July. It says international sanctions would be lifted once it was sure that Iran has met all agreements and reviews. Iran has repeatedly said its nuclear program is peaceful. Sanctions would be imposed again if Iran violates the deal.

VOA's News Division reported on this story. Kathleen Struck adapted it for Learning English. George Grow was the editor.

sanctions – n. a punishment for disobeying a rule or law

survey – n. a study of public opinion; studying something as a way of making a judgment about it

reviews – n. studies; carefully looking at or examining something