Update Required To play the media you will need to either update your browser to a recent version or update your Flash plugin.
By Mario Ritter Jr.
16 June 2022


The leaders of four European Union nations visited Ukraine on Thursday, promising to support the country's effort to join the 27-member group.

The leaders "are doing everything so that Ukraine alone can decide its fate," Macron said at a news conference. 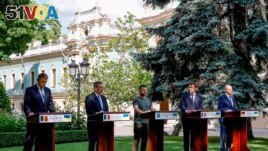 The visit by Macron and the leaders of Germany, Italy and Romania showed additional support for Ukraine. Ukrainian leaders have expressed concern that Western nations are tiring of the war.

The French, German and Italian leaders have faced criticism for continuing to talk with Russian President Vladimir Putin. Critics also say the leaders have not provided Ukraine with enough weaponry to defend itself against Russia.

After arriving in Kyiv to the sound of air raid warnings, the group headed to the nearby town of Irpin. Many civilians were killed there during intense fighting early in the war. The European leaders denounced the destruction they found.

Officials in Ukraine have expressed fears that "war fatigue" could slow or even end international support for Ukraine. Inflation and upcoming elections in the United States might capture more attention.

The U.S. and its European allies have given billions of dollars in weaponry and aid to Ukraine. Germany and the U.S. recently announced new arms shipments. Such weapons have been central to Ukraine's successful defense of its capital. But officials in Kyiv have said much more will be needed.

While hopes were high for the visit, some are expressing concerns.

Governor Serhiy Haidai of Luhansk said the visit would not bring progress if the leaders ask Ukraine to sign a peace treaty with Russia that involves giving up territory. Haidai governs an area in the Donbas area that is occupied by Russian forces.

"I am sure that our president, Volodymyr Zelenskyy, is not going to make concessions and trade our territories," he said.

While visiting Irpin, German Chancellor Olaf Scholz said that officials must remember the destruction around them as they make decisions.

"Innocent civilians have been hit, houses have been destroyed; a whole town has been destroyed in which there was no military infrastructure at all," Scholz said. He added that what the leaders had seen showed much about Russian aggression.

"They destroyed the nurseries, the playgrounds, and everything will be rebuilt," Draghi said.

Macron, Scholz and Draghi, represent the three largest economies in the European Union. They traveled to Kyiv together on a special train provided by the Ukrainian officials. But, they have been criticized for not visiting Kyiv sooner.

President Klaus Iohannis of Romania arrived on a separate train. His country borders Ukraine and has been important for Ukrainian refugees.

After seeing Irpin, Iohannis wrote on Twitter that there are "no words to describe the unimaginable human tragedy and horrible destruction." He called for the international criminal justice system to hold Russia responsible.

In Ukraine, Macron answered criticism of France's position, including his recent comment that Russia should not be "humiliated." The statement deeply angered Ukrainians.

His office also released information showing that Macron had spoken with Zelenskyy 23 times since the war began. That is more than Macron has spoken with Putin.

Tamara Malko lives in the Donetsk area that is part of the Donbas. She said Macron and Scholz had been "very cold" toward Ukrainians so far, and hoped for a change.

"We want peace very much...and have high hopes for Macron and Scholz," she said. "We want them to see and understand our pain."

fate –n. the things that happen to in the future over which people have no control

infrastructure –n. the system of public works of a country, state, or region

fatigue –n. a state of being very tired

concession –n. something that is given up in an effort to reach an agreement or stop a conflict

humiliate –v. to cause (someone) to feel very ashamed or foolish