Update Required To play the media you will need to either update your browser to a recent version or update your Flash plugin.
By Jonathan Evans
14 June 2022


The Wikimedia Foundation is appealing the decision of a court in Moscow demanding that it remove information related to the Russian invasion of Ukraine. The foundation owns the website Wikipedia, which many people use to get information. The organization argues that people have a right to know the facts of the war.

A Moscow court fined the Wikimedia Foundation $88,000 for refusing to remove what it called "disinformation" from Russian-language Wikipedia articles about the war. Disinformation is false information spread knowingly and often secretly in order to influence public opinion or hide the truth.

Stephen LaPorte is a lawyer representing the Wikimedia Foundation. He said in a statement, "This decision implies that well-sourced, verified knowledge on Wikipedia that is inconsistent with Russian government accounts constitutes disinformation." 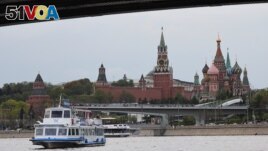 A view of the Kremlin, St. Basil's Cathedral and Zaryadye Park in Moscow, Russia May 12, 2022. ( REUTERS/Evgenia Novozhenina)

Wikipedia is one of the few remaining major Russian-language information providers for Russians. The government has placed severe restrictions on media in Moscow.

"The government is targeting information that is vital to people's lives in a time of crisis," LaPorte said. "We urge the court to reconsider in favor of everyone's rights to knowledge access and free expression."

The Moscow court said that what it considers disinformation on Wikipedia is a risk to public order in Russia. The court added that the Foundation, which is based in San Francisco in the American state of California, was operating inside Russia.

Ukraine says it will fight to the end to reclaim the territory that Russian forces have occupied. The country has repeatedly asked Western nations for more help to fight Russia.

President Vladimir Putin and Russian officials do not use the words "war" or "invasion." They call it a "special military operation" aimed at preventing the mistreatment of Russian speakers in eastern Ukraine.

Ukraine and its Western supporters deny Russia's claims that Russian speakers were mistreated. Officials say Russian forces have committed war crimes, including killings, torture and rape in places such as Bucha.

Russia says the claimed evidence of war crimes is made up of false material. Officials say Ukraine and its Western supporters have spread disinformation about Russian forces.

Jonathan Evans adapted this story for Learning English based on a report from the Reuters news service.

article –n. a piece of writing on a subject

imply –v. to express something in an indirect way; to suggest something without saying or showing it plainly

verified –adj. proven, shown or state to be true or correct

inconsistent –adj. having parts that disagree with each other

constitute –v. to be the same as or equivalent to something