Update Required To play the media you will need to either update your browser to a recent version or update your Flash plugin.
By Gregory Stachel
09 June 2022


Sam may not look like most superheroes. After all, he is a dog. He has four legs and fur. But, like all superheroes, Sam has a superpower. His special skill is collecting waste, or garbage, to set a good example for visitors.

Sam uses his superpower to help clean a large park in Chile's capital city, Santiago. He even wears a green cape – a piece of clothing that many superheroes wear.

Sam's superpower started with walks in Santiago's Metropolitan Park with his owner, Gonzalo Chiang. Chiang said he and the dog would find and pick up a lot of garbage along the way – from plastic bottles to face coverings. 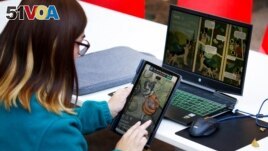 Designer and employee of the ministry of housing and city planning (Minvu) Catalina Aravena, shows a comic titled "Sam, the superhero of metropolitan park", (Parquemet), created in honor of a dog named Sam. Picture taken on May 31, 2022. (REUTERS/Sofia Yanjari)

Chiang said, "From that, the need to come prepared to take away the garbage that we found on each visit arose."

Chiang said, "The walk is a good opportunity to clean, rather than litter." To litter means to throw or leave garbage on the ground in a public place.

Park officials were pleased with Sam and Chiang's effort. In fact, they decided to use Sam's image for their campaign urging visitors to take better care of the park.

Artist Catalina Aravena turned Sam into a cartoon character. A cartoon is a series of designs, or drawings, that tell a story. Sam's story is called "Sam: The Parquemet Superhero." Parquemet is what most locals call Santiago's Metropolitan Park.

Aravena said the cartoon "became much more widespread than expected." She added, "It reached different schools and it has been spread very well on social media."

Park officials launched anti-littering campaigns last year. They urged food and drink sellers within the park to use glass containers instead of plastic and to sort garbage into separate containers.

Eduardo Villalobos is the park's acting director. He said Sam and Gonzalo have "inspired" park leaders to strengthen their efforts related to educating the public and collecting waste.

park – n. a piece of public land in or near a city that is kept free of houses and other buildings and can be used for pleasure and exercise

arise – v. to begin to occur or to exist

inspire – v. to make (someone) want to do something: to give (someone) an idea about what to do or create