Figure Skaters Must be 17 to Skate in the 2026 Olympics

Update Required To play the media you will need to either update your browser to a recent version or update your Flash plugin.
By Dan Friedell
08 June 2022


The governing body of figure skating has raised the age limit for international competitions to 17. The decision followed a heated dispute surrounding Russian skater Kamila Valieva at the Beijing Olympics.

The International Skating Union (ISU) voted 110-16 to raise the age limit to 17 before the next Winter Olympics in Milan-Cortina d'Ampezzo, Italy. The change will be phased in with 15-year-olds being permitted to compete for this season and 16 the following season.

ISU president Jan Dijkema called the decision "historic." And the organization said it wants to protect the "physical and mental health, and emotional well-being of the skaters." 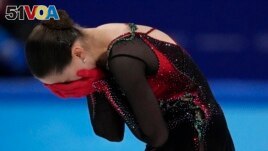 The change in age limit was coming even before the pressure on 15-year-old Kamila Valieva at this year's Olympics. She had a good chance to win an individual gold medal after helping the Russians win the team competition.

After the team competition, news came out that Valieva had tested positive for an illegal drug at the end of 2021. But she was permitted to compete in the individual competition. She finished in fourth place but was criticized by the Russian coach, Eteri Tutberidze, at the end of her skating program.

The new age limit could hurt the career of 14-year-old Sofia Akateva, the top young Russian skater. She turns 15 too late to be able to compete this season. But she will be 18 at the next Winter Olympics in 2026.

The decision was criticized in Russia, where skaters are currently banned from international competitions following the invasion of Ukraine.

Dmitri Soloviev won a gold medal as a part of the Russian team in 2014. He told a Russian broadcaster the change was made "so that our Russian female skaters couldn't have the opportunity to win world championship, European, Olympic medals."

"But in my opinion, Eteri Tutberidze will find a way to get our athletes into ideal condition at the age of 17 or 18," Soloviev added, "so that they can show their best results at international competitions..."

phase– v. to do something slowly over a period of time

positive – adj. showing the presence of a germ or something being tested for

opportunity– n. the chance to do something

ideal– adj. the best, the strongest or exactly right