New York Court Rules That an Elephant Is Not a Person

Update Required To play the media you will need to either update your browser to a recent version or update your Flash plugin.
By Hai Do
14 June 2022


Happy the elephant may be intelligent and worthy of our care, but she cannot be considered a person, New York's top court ruled on Tuesday.

Supporters at the Nonhuman Rights Project said Happy is an independent being with complex thinking abilities. They wanted her moved from what they say is a prison-like space she lives in at the zoo. They argued that she should have that right under law as "a person." 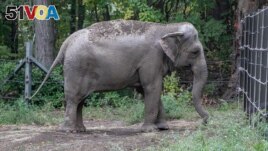 The Bronx Zoo, where Happy lives, argued Happy is neither illegally imprisoned nor a person. The zoo and its supporters warned that a win for the Nonhuman Rights Project could open the door to more legal actions on behalf of animals, including pets, farm animals and other animals in zoos.

In a 5 to 2 decision, New York's Court of Appeals agreed with the Bronx Zoo's argument.

The court's majority said the law to protect the liberty of human beings does not apply to a nonhuman animal like Happy. The majority added that giving Happy the right to dispute her place in the zoo would have a major "destabilizing impact on modern society."

Two judges on the high court disagreed with the majority. They wrote that being an animal does not prevent Happy from having legal rights. They called her captivity "unjust and inhumane."

The ruling from New York's highest court cannot be appealed. The Nonhuman Rights Project has failed in similar cases, including those involving a chimpanzee in upstate New York named Tommy.

Steven Wise is the group's founder. He said, "We will take a really close look at why we lost, and we'll try to make sure that that doesn't happen again to the extent that we can."

Happy was born in the wild in Asia in the early 1970s. She was captured and brought as a 1-year-old to the United States. She arrived at the Bronx Zoo in 1977.

Michael Hill reported this story for the Associated Press. Hai Do adapted it for VOA Learning English.

captivity –n. a state of being held in a place and not being able to leave or to be free