Update Required To play the media you will need to either update your browser to a recent version or update your Flash plugin.
By Anna Matteo
14 June 2022


The circle of life was on live display with the help of some little children and young turtles in the American state of New Jersey.

A group of kindergartners returned 17 young turtles to the wild in the coastal wetlands of a town called Stone Harbor.

The turtles had been found as eggs in the bodies of their mothers, all killed by cars travelling through the animal's habitat. 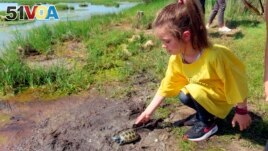 A kindergarten student releases a turtle back into the wild at the Wetlands Institute in Stone Harbor, N.J., Wednesday, June 8, 2022. (AP Photo/Wayne Parry)

The release was part of a program that has saved thousands of turtles and has returned them to the wild over the past 25 years. The turtles were either raised from eggs or were themselves rescued from roads, storm drains or other dangerous places over the years.

"It is (It's) a great community connection," said Lisa Ferguson.

Ferguson is the director of research and conservation at the Wetlands Institute. It operates the program jointly with Stockton University and Stone Harbor schools.

The program shows "how conservation works, and that everyone has a part to play, from adults down to kindergarten students," Ferguson told the Associated Press.

The turtle release took place during a busy day of turtle activity. June is egg-laying season on the New Jersey coast. Turtles come out of the wetlands onto dry land to lay their eggs. The open area is far more dangerous for the turtles, as they are hunted by other animals. But, the even greater threat is automobiles.

"We lose 550 adult females each year to road kills," Ferguson said of the area in southern New Jersey.

Moments after she spoke, a man arrived at the Institute with a bleeding turtle. He had just rescued it from the road nearby. Salvatore Volpe said he saw a car hit the turtle as the animal was crossing the street. So, he brought it to the Wetlands Institute for treatment.

The turtle was injured but would live, said the experts.

Then he ran off to save another turtle from the dangers of the road.

Wetlands Institute cares for injured turtles. It also collects eggs from those killed on the road. Experts at the organization incubate the eggs at 30 degrees Celsius. This ensures they will develop into females.

Stockton University also incubates eggs and cares for the turtles in the first year of their lives. When they have grown enough in the first year, they are released into the wetlands surrounding the institute.

Kindergartners from Stone Harbor schools get to know the turtles from their start in their shells. The young students name the turtles and draw pictures of them. They raise money for turtle care through the sale of tasty treats.

Then it comes time to set the beloved turtles free to seek their future where they belong.

Some children quickly and happily picked up the turtles and took them to the water. Other children were not as sure they wanted to touch the young animals or their muddy habitats.

But every child seemed very pleased as the turtles made their away into the water.

The program releases 150 to 200 turtles into the wild each year.

Wayne Parry reported on this story in New Jersey for the Associated Press. Anna Matteo adapted it for VOA Learning English.

display – v. to put or spread before the view

kindergartner – n. a school or class for children usually from four to six years old

habitat – n. the place or environment where a plant or animal naturally or normally lives and grows

conservation – n. planned management of something (as natural resources or historic places) to prevent waste, destruction, damage, or neglect

slaughter – v. the act of killing

incubate – v. to sit on (eggs) so as to hatch by the warmth of the body