New Zealand May Put Price on Emissions from Cows and Sheep

Update Required To play the media you will need to either update your browser to a recent version or update your Flash plugin.
By John Russell
11 June 2022


New Zealand recently released a proposal to put a price on gases released from agricultural activity. The move is part of an effort to deal with the country's biggest sources of greenhouse gases: sheep and cattle.

Greenhouse gases, including carbon dioxide and methane, are believed to cause warming temperatures in the Earth's atmosphere.

The measure would make New Zealand the first country to have farmers pay for emissions from farm animals, the Ministry for Environment said. 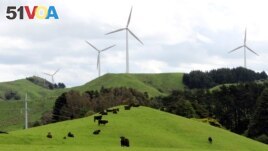 New Zealand, home to 5 million people, has about 10 million cattle and 26 million sheep. These animals release gases such as methane.

Nearly half of New Zealand's total greenhouse gas emissions come from agriculture. But agricultural emissions have previously not been part of the country's emissions trading plan. This has lead some to criticize the government's willingness to stop the greenhouse effect, known as global warming.

Under an early version of the plan, which was put together by government and farm community representatives, farmers will have to pay for their gas emissions starting in 2025. Short-and long-lived farm gas will be priced separately, although a single measure to calculate their volume will be used.

He said, "There is no question that we need to cut the amount of methane we are putting into the atmosphere, and an effective emissions pricing system for agriculture will play a key part in how we achieve that."

The proposal includes incentives for farmers who reduce emissions through feed additives, while on-farm forestry can be used to make up for emissions. Money from the plan will be invested in research, development and information services for farmers.

Michael Ahie is chair of the climate action group He Waka Eke Noa. Ahie used the term sustainable, meaning involving methods that do not completely use up or destroy natural resources, to describe the plan.

The proposal would possibly be the biggest change to farming since the removal of agricultural subsidies in the 1980s, said Susan Kilsby, an agricultural economist at ANZ Bank.

A final decision on the plan is expected in December.

Lucy Craymer reported on this story for Reuters. John Russell adapted it for VOA Learning English.

subsidy – n. : money that is paid usually by a government to keep the price of a product or service low or to help a business or organization to continue to function