Little Boy Found in Woods Says He ‘Hung Out’ with Bear

Update Required To play the media you will need to either update your browser to a recent version or update your Flash plugin.
By Anna Matteo
28 January, 2019


A 3-year-old boy who was lost in the woods for two days is now safe at home with his family. But Casey Hathaway told his rescuers that he was not alone in the rainy, freezing cold woods. He said he was with a friend – a bear.

The child went missing on January 22 while playing with friends at his grandmother's house in the southern state of North Carolina. When the other children returned to the house and Casey did not, the family searched the area for almost an hour before calling the police.

Police formed a search and rescue team to look for the young boy in the nearby woods. But two days went by and still -- no Casey. 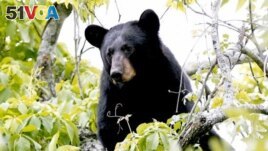 The woods of North Carolina are home to many black bears, like this one. It seems one of them helped a little boy while he was lost in the woods. REUTERS/State of Louisiana Department of Wildlife and Fisheries/Handout via Reuters

Then on January 24, someone called the police saying they heard a child crying in the woods. Police followed up on the information and found Casey at about 9:30 that night. They pulled him out of some briar. He was in good health.

Casey told the rescuers that he had hung out with a black bear for two days, a bear he called his "friend."

Sheriff Chip Hughes spoke with reporters from several news agencies. He said Casey did not say how he was able to survive in the woods for three days in the cold, rainy weather. However, the sheriff said, "He did say he had a friend in the woods that was a bear that was with him."

Hundreds of people helped in the search and rescue efforts, including some 600 volunteers, federal police and members of the military. Officer Hughes told reporters that at no point did he think Casey had been kidnapped.

Doctors at Carolina East Medical Center treated Casey for minor injuries. He was then released to his family on January 25.

His mother Brittany Hathaway talked with reporters from a local news agency and thanked everyone who joined the search for her son.

"We just want to tell everybody that we're very thankful that you took the time out to come search for Casey and prayed for him, and he's good," said his mother. "He is good, he is up and talking. He's already asked to watch Netflix. So, he's good..."

This story was reported by several news agencies in North Carolina. Anna Matteo adapted them for VOA Learning English. Caty Weaver was the editor.

hung out – phrasal verb : to spend time in a certain place or in certain company

briar – n. a plant (as the rose or blackberry) with a thorny or prickly stem