Game of Chance to Pay One Winner $1.5 Billion

Update Required To play the media you will need to either update your browser to a recent version or update your Flash plugin.
By Ashley Thompson
24 October, 2018

A small piece of white paper sold at a convenience store in South Carolina is now worth more than $1.5 billion.

Lottery officials in the southern state say a ticket that matched all six numbers of Tuesday's Mega Millions drawing was sold at the KC Mart shop in Simpsonville. The town has a population of about 18,000 people.

The world may never know who the winner is, however. South Carolina is one of eight American states that does not make lottery winners publicly identify themselves. 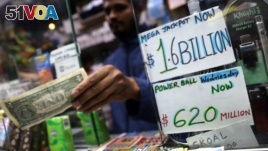 The South Carolina Education Lottery tweeted, "Our message to the $1.5 BILLION #MegaMillions jackpot winner: Sign the back of the ticket, place the ticket in a safe location, speak with a trusted advisor and call the lottery...Take a deep breath and enjoy the moment!"

The ticket is worth about $877.8 million if the winner chooses to accept a one-time payment. That is what most lottery winners do. The other choice is to collect the full amount in yearly payments over the next 29 years.

Earlier estimates had said this week's Mega Millions game would be the largest lottery jackpot ever. However, the actual number ended up being just under a record set in 2016.

The Associated Press reported this story. Ashley Thompson adapted this story for Learning English. Mario Ritter was the editor.

convenience store - n. a small store that is open for many hours of the day

lottery - n. a way of raising money for a government, charity, etc., in which many tickets are sold and a few of the tickets are chosen by chance to win prizes drawing

drawing - n. an act of choosing something (such as a winning ticket) from a group without knowing