Update Required To play the media you will need to either update your browser to a recent version or update your Flash plugin.
By Hai Do
09 October, 2018

Taylor Swift is one of the biggest names in American pop music. Millions of fans follow the singer-songwriter on social media for the latest in music and fashion.

On Sunday night, Swift did something that she has never done before. She announced her opposition to one candidate, and her support for others, running in November's midterm elections.

Swift wrote, "due to several events in my life and in the world in the past two years...I cannot support Marsha Blackburn. Her voting record in Congress appalls and terrifies me." She added that she "will be voting for Phil Bredesen for Senate and Jim Cooper for House of Representatives."

Blackburn is a Republican Party lawmaker representing the state of Tennessee. She serves in the United States House of Representatives. Swift wrote that Blackburn is against gay rights, equal pay for women and legislation to protect women from domestic violence, stalking and date rape. 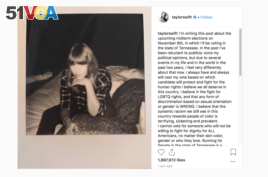 President Donald Trump, who has campaigned for Blackburn, dismissed Swift's opinion of the candidate. He said, Swift "doesn't know anything about her. And let's say that I like Taylor's music about 25 percent less now, OK?"

The non-profit website vote.org reported a flood of new voter registration after the post. A spokeswoman told Buzzfeed, "We are up to 65,000 registrations in a single 24-hour period since T. Swift's post."

appall - v. to cause someone to feel fear, shock, or disgust

domestic - adj. relating to or involving someone's home or family