Update Required To play the media you will need to either update your browser to a recent version or update your Flash plugin.
By Caty Weaver
04 September, 2018

A business deal between Nike and former American football star Colin Kaepernick is creating a flood of debate online.

Kaepernick became famous for starting a wave of protests among National Football League players of police brutality, racial inequality and other social issues. The protests involve not standing during the singing of the United States national anthem. It is often played before the start of sporting events.

Before a game in 2016, Kaepernick remained seated for the anthem. At later games, he placed one knee on the ground. His move inspired some and angered others. Soon, several other NFL players began to kneel.

Opponents said the protest act disrespected the country and its military service men and women. Supporters argue that the military is not the target of the protest, but a lack of social justice. 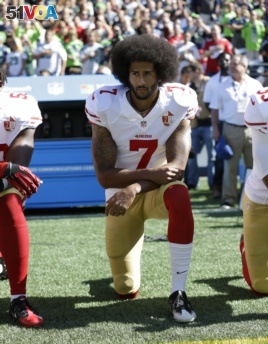 Kaepernick was with the San Francisco 49ers in 2016. But he left the team after that season. He has not played football since.

Kaepernick already had a contract with Nike that was set to end. Now, Nike has made him the face of its 30th anniversary "Just Do It" campaign.

Kaepernick's lawyer announced the deal on Twitter, calling Kaepernick an "All American Icon." Kaepernick also posted a Nike ad featuring his face with the words: "Believe in something, even if it means sacrificing everything. #JustDoIt."

The Nike-Kaepernick deal was a trending subject on social media. On Twitter, some users urged for a boycott of the company's clothes and shoes. Some published videos that showed them burning or cutting the sportswear.

Country music star John Rich tweeted a picture of one of his crew members holding the tops of a cut pair of Nike socks. A message underneath read: "Get ready @Nike multiply that by the millions."

The message received over 30,000 likes. There were also thousands of comments opposing the tweet.

Others supported Nike and Kaepernick. Many suggested that those who were burning or cutting Nike products should instead donate them to homeless veterans, or other people in need.

Tennis star Serena Williams, who is also a Nike athlete, wrote on Twitter: "Especially proud to be a part of the Nike family today."

Nike is the official uniform provider for the National Football League, which begins its new season on Thursday.

Kaepernick has taken legal action against the NFL and its 32 teams. Last week, an arbitrator denied an NFL appeal to have the case dismissed. Kaepernick accuses NFL team owners of plotting to keep him out of the league because of his protests.

A similar legal action was brought by former 49ers player Eric Reid, who joined in the protests. Reid is also now out of the league.

On Friday night, Kaepernick and Reid attended the U.S. Open tennis tournament in New York City. They watched the match between Serena and Venus Williams. The two men received loud, supportive cheers when they were shown among the crowd on the big screen.

After winning the match, Serena Williams told reporters, "Every athlete, every human and definitely every African American should be completely grateful...for how Colin and Eric are doing so much for the greater good."

The Associated Press reported this story. Caty Weaver adapted it for VOA Learning English. ­­­­­­­­­­­­­­­­­­­­Ashley Thompson was the editor.

icon - n. a person who is very successful and admired

veteran - n. someone who fought in a war as a soldier, sailor, etc.

arbitrator - n. a person who is chosen to settle a disagreement between people or groups

grateful - adj. feeling or showing thanks