Update Required To play the media you will need to either update your browser to a recent version or update your Flash plugin.
By Ashley Thompson
09 August, 2018

The search engine Google celebrated on Thursday what would have been the 110th birthday of the first Native American woman engineer. Google honored Mary Ross with a special Google Doodle on its homepage.

Ross was born on August 9, 1908, in the state of Oklahoma. She was the great-granddaughter of John Ross, the longest-serving chief of the Cherokee Nation.

Her work is considered critical to the early stages of the age of space travel. 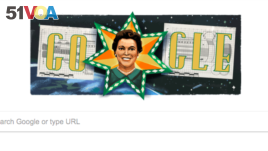 A screenshot of the Google Doodle honoring the 110th birthday of Mary Ross.

Ross showed special abilities in math and science from an early age. As a student, she developed an interest in aviation, or the practice of flying aircraft. She went on to earn a master's degree in mathematics from Colorado State Teachers College -- now called the University of Northern Colorado.

During World War II, Ross began working for the Lockheed Aircraft Corporation as a mathematician. There, she was urged to complete work in aeronautical engineering. She earned a special certification in the field from the University of California - Los Angeles in 1949.

Ross was later chosen to join Lockheed's top-secret Skunk Works team that worked on aircraft designs. The name refers to a group that is permitted to work independently on advanced projects. She was the only female engineer among the team's 40 members.

Early on, she researched defense systems. By the late 1950s, her work centered on satellites and a series of space rockets called Agenda. The rockets were extremely important in the 1960s during the Apollo moon program.

Ross retired from Lockheed in 1973. But she continued to give talks at high schools and colleges to encourage more women and Native Americans to study engineering.

Many celebrated Ross' life on social media. The National Science Foundation wrote on Twitter Thursday, "engineers like Mary Ross are an inspiration to women everywhere. Women and minorities continue to face challenges and break through barriers in engineering."

Scientists on Twitter wrote that Thursday's Doodle introduced them to Mary Ross for the first time.

Twitter user Aaron Perez, for example, wrote: "Mary Ross was an engineer who pioneered in the field of satellites. I never would [have] known if it wasn't for the doodle. Women engineers deserve more recognition."

aeronautical - adj. related to the science that deals with airplanes and flying

challenge - n. a difficult task or problem : something that is hard to do

inspiration - n. something that makes someone want to do something or that gives someone an idea about what to do or create : a force or influence that inspires someone

ballistic missile - n. a weapon that is shot through the sky over a great distance and then falls to the ground and explodes

rocket - n. a spacecraft or missile that is powered by a rocket engine

certification - n. official approval to do something professionally or legally

pioneer - v. to help create or develop (new ideas, methods, etc.) : to be a pioneer in the development of (something)